Imagine If Sarah Palin Put Angelina Jolie On Her 2012 Ticket

Imagine If Sarah Palin Put Angelina Jolie On Her 2012 Ticket 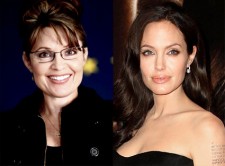 It’s unlikely to say the least, but still, Angelina Jolie appears to have struck a decidedly Sarah Palin-esque tone in her Newsweek op-ed (talking about gunning for traffic!) in so far as criticizing President Obama for what he’s not doing. Jolie penned the piece for the weekly mag’s website to mark Human Rights Day and questions the president’s plans for Darfur.

Like many Americans, I support the administration’s willingness to engage diplomatically, even with regimes we abhor. And I believe President Obama and his special envoy Scott Gration will do their best to bring peace to the region. Their policy, though, raises a number of questions. How is the Obama administration’s approach to Sudan an evolution of justice? In addition, when the administration says it intends to work to “improve the lives of the people of Darfur,” I would like to know what that means, besides the obvious point that their lives could hardly get worse.

And what will be the precedent set for future leaders? Will they end up receiving high-level international attention, and remain free to pocket financial assistance and aid relief pouring into their country? Is there incentive for them to act with impunity or will they fear they’ll be held accountable?

Actually, it’s not very Sarah Palin-like at all (though maybe she should consider launching her own Facebook page). Jolie asks good questions and I’m just going to hazard a guess that Palin does not “support the administration’s willingness to engage diplomatically, even with regimes we abhor.” So probably a Palin-Jolie 2012 ticket is really just a Friday afternoon fantasy. But we can dare to dream.