Reminder: CPAC Is a Fraud and Is Largely Responsible for Trump Hijacking the Movement
Opinion

Reminder: CPAC Is a Fraud and Is Largely Responsible for Trump Hijacking the Movement 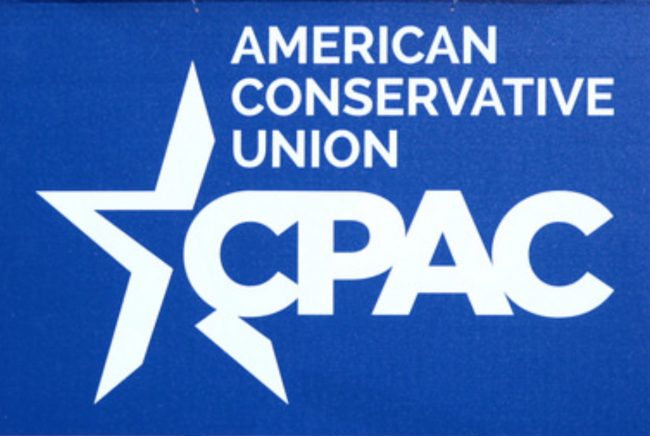 Second behind whether Punxsutawney Phil will see his shadow on Groundhog Day, controversy over CPAC is now the news media’s most reliable annual rite of late winter. This year, the week of the “conservative” conference is beginning with outrage over Milo Yiannopolous, the gay/British version of Ann Coulter, being named as a keynote speaker and then disinvited when video emerged implying that he supports sexual relationships between teenage boys and older men.

While the Milo distraction is interesting (he seems to get more of what he wants every time he is prevented from speaking, though I fail to understand what possible justification there was for the invitation in the first place), the far more significant story regarding CPAC is what a blatant fraud the whole thing is and how they are largely responsible for Donald Trump hijacking the entire conservative movement.

I have been trying to warn about this reality for many years. I spoke at CPAC several times and even was a co-sponsor in 2009 to promote my documentary “Media Malpractice: How Obama Got Elected.” I realized that the entire venture, which claims to be about promoting the conservative cause, is nothing more than a racket to make money, get publicity, and enhance the media profile of those within the “in-crowd” (of which, thankfully, despite being Andrew Breitbart’s wingman for a couple of them, I was, not surprisingly, never a part).

What outraged me most was that while being in on the speaker selection meetings I realized that people were being given invitations despite those in charge knowing they were traitors to the conservative movement, all because they either gave money, or ensured media attention for the event. In 2009, I specifically objected to author Jerome Corsi, a 9/11 conspiracy theorist and Barack Obama “Birther” being on the proposed speaker list and was told (incorrectly) that he would be removed. Now, just eight years later, we have a “Republican” president who shares largely the same insane views.

Later that year, while scheduled to speak here in California at “Western CPAC,” I aggressively/hilariously confronted David Keene, the then head of the American Conservative Union (which runs the event), about allegations of “pay for play” against him, and he completely melted down. Shockingly (not really), I was removed from my speaking slot that afternoon and have never been invited back.

Keene would leave the ACU soon after that but not after making a fateful decision to dole out a prime speaking slot at the 2011 CPAC to Donald Trump in exchange for a $50,000 donation (they would reportedly take at least another $50,000 for the same deal in the next presidential cycle). To be clear, this was a complete sell out by CPAC and a key part of the overall Trump strategy. At the time, Trump had less than zero credibility with conservatives and that speech, complete with the CPAC seal of approval, was the first critical domino to fall in Trump’s hostile takeover of the Republican Party.

Because of that address, Trump was then taken seriously by the news media for the rest of 2011 as a potential presidential contender. Even though he passed on 2012, that momentum, combined with his “Birther” fantasies, forced 2012 GOP nominee Mitt Romney to hold an embarrassing public event accepting Trump’s endorsement. This further elevated Trump stature within the GOP and set the stage for the coup which would happen in 2016.

Ironically, and rather typical of all things Trump, last year Trump actually cancelled his address to CPAC (which, since he was already the GOP frontrunner at the time, was presumably scheduled for free) over fear of questions he might be asked. He then faired very poorly in the remarkably un-predictive CPAC straw poll.

Now that he is President Trump, he is back on the schedule, presumably under whatever conditions he demands. So in just a few years, a life-long liberal has gone from having to pay more money than anyone else in order to speak at CPAC, to ditching them at the last minute, to being by far their most treasured attraction as the President of the United States.

Is this a great country, or what?!

Trump and CPAC deserve each other. They are cut from the same cloth and the fact that CPAC is so entrenched should have been the sign that the fortress protecting the conservative movement was always incredibly vulnerable to being easily breached.

Importantly, it is the other very weak link of the movement, talk radio and the “conservative” media (that have also turned the cause into purely a money-making scam), that has helped protect CPAC from being fully exposed as the fraud that it really is. Conservative media members love CPAC because it gives them a chance to pretend to be important, get applause (or more) in person, and sell their wares. Almost no prominent member of the formerly conservative (now “Pro-Trump”) media will speak out against CPAC because they all benefit from its existence. This, not coincidentally, is exactly how Trump was allowed to become the GOP nominee.

So when Trump speaks to CPAC to what will surely be a rousing ovation, please remember that his presence there is literally the personification of the death of the very movement everyone there will be pretending to promote. In many ways, it will encapsulate our entire media culture where so often things are not only not what they appear to be, but actually the exact opposite of the perception.

John Ziegler hosts a weekly podcast focusing on news media issues and is a documentary filmmaker. You can follow him on Twitter at @ZigManFreud or email him at johnz@mediaite.com
— —