In The War Between President Trump and The NFL, No One Wins 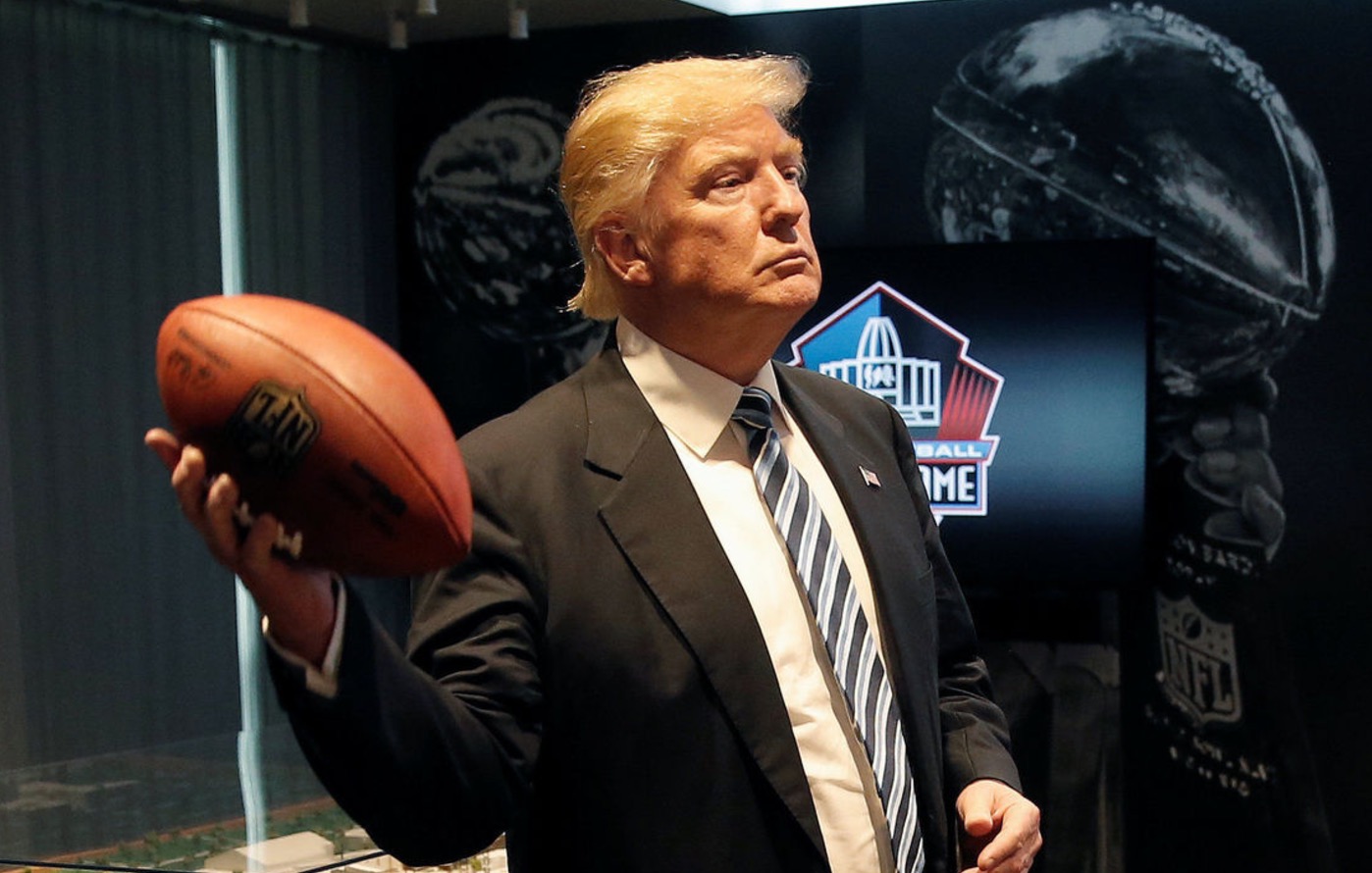 The national anthem is at the center of a fiery debate that became a political firestorm on Friday after President Trump railed against athletes who protest “The Star Spangled Banner” at a rally, urging team owners to “get that son of a b*tch off the field” and have them fired. Since then, hundreds of NFL players “took a knee” during the national anthem, some teams even stayed in their locker rooms. And to make matters worse between Trump and the sports community, he escalated a feud with Golden State Warrior basketball star Stephen Curry after Curry said he didn’t want to go to the White House with his team by officially rescinding his invite via Twitter, causing the whole team to cancel their visit altogether.

It’s important to remember how this debate originated. It all started in 2016 when San Francisco 49ers Quarterback Colin Kaepernick began sitting during the national anthem, which evolved into a kneel in protest of police brutality against black Americans. Only a few athletes initially joined Kaepernick in such a protest and he is now waiting in limbo to be picked up by a team, which many see him as being too controversial for their brand despite his talent level. Several of his supporters believe he’s being blackballed by the NFL.

The reason why there was so much outrage towards Kaepernick is because his critics see his sitting or kneeling during the national anthem as disrespect for the country, the flag, and the military and that he shouldn’t take out his frustrations about police shootings on symbols of American patriotism. While I personally think it is disrespectful of Kaepernick to “take a knee” in the two minutes of a game that we all go out of our way to express pride for our country, I also respect his right to peacefully protest and I would allow the free market to decide whether he deserves to keep his job rather than to fire him for expressing himself. Plus, calling for Kaepernick’s firing for peacefully protesting while dozens of players get to keep there jobs after they beat up their wives and girlfriends is absolutely insane.

Yet since Trump called for the firing of any anthem protestors and encouraged a boycott of the NFL, the meaning of “take a knee” shifted. It seems that it is no longer solely about protesting police brutality, but now also about protesting the president. Imagine if they felt this passionate about domestic abuse or CTE (chronic traumatic encephalopathy), two things that directly impact these players and often get brushed under the rug, then they’d really create change.

That being said, just as these athletes have their First Amendment right to kneel or stay in the locker room during the national anthem, Trump has his First Amendment right to scold them just as I have my First Amendment right to criticize him. Whether you agree with Trump or not, his verbal lashing was unnecessary. Between his struggle to get health care reform passed, the ongoing threats from North Korea, and the millions of people who have suffered from hurricanes these past few weeks, it wouldn’t be the worst thing if the president kept focus on the issues that affect all Americans and not get so fixated or even involved in things that don’t involve him or the government. And his withdrawal of Curry’s invitation after he said he didn’t want to go was completely juvenile and embarrassing. It’s no secret that Trump can’t handle criticism from high-profile cable news hosts, actors, comedians, and now athletes, but for him to stoop to such a level only makes him look like a baby. And putting aside my sentiment that aligns with Trump on this particular issue, I think his tangent only fed into the divide in this country.

While Trump’s demeanor in this ongoing controversy is futile and infantile, some of the media’s reaction has also been worthy of critique. Take CNN’s Brian Stelter for example. He said there was an “unmistakable racial component” to Trump’s attacks on these athletes. And he’s right – 70% of all NFL players are black — and that the vast majority of these NFL protestors that were protesting police brutality were black, but on his own show Reliable Sources, he flat-out asked, “Is President Trump a racist?” Just because Trump criticized these players, who just so happen to be black, that doesn’t make him a racist. This is the same false argument that was made whenever conservatives and Republicans criticized President Obama. They were branded as racists because they dared to speak ill of the first black president.

Whether or not you think Trump is a bully, he’s certainly an equal opportunity critic. We’ve seen him go after Republicans, Democrats, men, women, whites, blacks time and time again. That’s not something Stelter would bring up because it doesn’t fit his narrative. There’s plenty to criticize Trump about, but to keep pushing the “he’s a racist!” crap like Stelter and others in the media have done and will continue to do is shameless, lazy, and only undercuts the president’s actual wrongdoings.

Ultimately, the reaction to Trump’s recent remarks by these NFL players will backfire, at least that’s what I predict. Ratings have already been down this season after they previously fell in 2016, and while there has been a downward trend of ratings across all broadcast networks and programs, many have pointed to the over-politicalization of sports as the reason. So if these mass protests keep up, it’s probably going to get worse. Just as it plays right into Trump’s hands whenever the media overreacts to something he said, he’s hoping the same will happen here. And if enough people heed his advice and either walk out of NFL games or boycott the league altogether, then the future of the sport is uncertain.

The 2016 election left us all divided and since then people made their own ideological bubbles that refuse to acknowledge the reality that doesn’t match with their emotions. And politics has seemed to plague everything from our late-night talk shows, comedies, award shows, ESPN, and now televised sports. There seems to be nothing sacred anymore. But throughout our nation’s history, through good times and bad no matter how different we were, what united us was the pride we had when we said the Pledge of Allegiance, when we sang “The Star-Spangled Banner,” and when we saw the American flag fly in the air. Some things were simply above politics. We were able to put our differences aside, come together, and bond over our love for this country. Sadly, many have failed to rise above politics, especially since the election. Curry failed to do so, but he isn’t the first athlete to opt out of visiting the Trump White House and such a practice was also done (though not nearly as often) under President Obama.

I personally didn’t like the actions and policies of Obama. There were plenty of things that were done in the past eight years that I objected and was even ashamed of, but I were ever given an invitation to meet him, I would never reject it. Despite any animosity I might have towards him or his administration, I still respect the office and the institution that put him there.

Whether you’re on Team Trump or Team Take The Knee, just take a moment and think about what being an American means to you. If there are enough people who think the United States is an irredeemable, cruel, unjust country that purposely suppresses the lives of millions and they’re indoctrinating that mentality to their children, then I truly fear for what’s to come in this political climate. However, if they’re vastly outnumbered by those who take pride in this great nation despite the flaws throughout its existence, there could be hope after all.