In Times Of Media Caution, The Boston Manhunt Proves Twitter The Biggest Threat To ‘Old’ News

In Times Of Media Caution, The Boston Manhunt Proves Twitter The Biggest Threat To ‘Old’ News 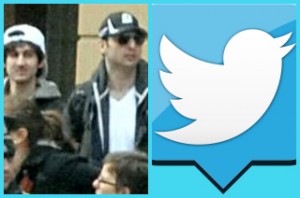 We need to be careful now…

This hasn’t been confirmed…

Sources are telling us, but…

If you were to add up the number of reports that started this way throughout the week—particularly since some media outlets (New York Post, Boston Globe, AP, CNN, FOX) were incorrectly reporting an arrest on Wednesday in the Boston Terror attacks—you’d be using commas in the total amount by now. And as a media observer and columnist, it’s nothing short of fascinating to watch television news falling over themselves in their caution.

But the press has made plenty of mistakes in big spots before, so what’s different this time around?

Social media, that’s what. Especially Twitter. Its users have pounded the aforementioned outlets on the arrest-that-never-happened-scenario, and you can just see the effect being felt in the papers and on the tube. All are acting and looking so afraid to make a mistake.

Jon Stewart body slammed CNN’s John King, while Megyn Kelly also got roughed up in the Twitterverse. AP and the Boston Globe, since they’re basically faceless entities, got off relatively easy, but still felt some body blows. All would later be forced to walk back their statements after the FBI refuted them, but all also got a case of the Fonzies in the process.

Fonzies as in Arthur Fonzarelli, the iconic mechanic/player/Uncle of Chachi/Owner of the New Arnold’s who ruled fictitious Milwaukee back in the late 50s and early 60s. The Fonz never didn’t get the girl, hardly ever made a mistake (successfully jumping 14 garbage cans on a motorcycle in Season 3 and a shark in Season 5). But in the rare occasions Fonzarelli did screw up, he couldn’t physically say the words, “I’m sorry,” or “I was wrong.”

Same goes for news outlets when they make a (gasp) mistake in the heat of battle to be first (an increasingly difficult race to win considering social media and newspapers’ ability to update stories on the fly). A simple, “Sorry, we made a mistake.” Or…”We got it wrong, folks,” is about as rare as seeing the Fonz without a leather jacket and/or t-shirt. On a side note, it’s tough to absorb seeing Henry Winkler (in his non-Fonz, wimpy voice) doing commercials on cable news for reverse mortgages…

Back to the biggest story of the decade–what transpired Friday morning in the Boston terror attacks manhunt, complete with bombs being tossed during car chases and shootouts with police–was a preview of how huge, unexpected events will be absorbed in the future. Know this: There are now six big news networks.

Here’s how my early morning went on Friday:

Couldn’t sleep around 2:00 AM. Rolled over and checked my phone to see who won the Yankee game (originally fell asleep in extra innings). Yanks lose. Randomly go over to Facebook, where one friend simply puts on his status: “Looks like we got ‘em.” It’s obvious what he means and I’m tempted to turn on the TV, but too lazy to go out to the living room, so I turn to Twitter.

From there, three hours go by as fast as three minutes. The page can’t be refreshed fast enough. If 30 seconds goes by without a new update from someone, the internet connection is briefly questioned.

Periodically, I turn to CNN (on my iPad with headphones) to see what they’re reporting. When juxtaposed against the Twitter rush of information—primarily via police scanners and YouTube video of shootouts downloaded minutes after they occur—it’s hard not to notice how slow television reporting can feel. It’s one anchor, one guest, one shot, and that feeling you get when waiting for a table at a crowded restaurant.

On Twitter, it’s dozens of voices, dozens of perspectives, almost simultaneously. And what made the Friday morning chase sequence so gripping was that it occurred at such a time (2:00 AM) that the usually-overexposed and oftentimes-annoying people I follow were mostly all asleep, thereby allowing a guy like Seth Mnookin to stand out like the North Star for all of us out looking for a reliable guide.

Mnookin—a writing Professor in MIT’s grad program—was as close to embedded as it gets. Here’s a few examples from Friday morning and the incredibly vivid picture the 40-year-old was reporting in dozens of tweets in the early morning hours in real time:

“Air support called in. (Police) Scanner traffic has explosives strapped to suspect; did not see that here.”

“When I got here, police were asking to use my phone to navigate neighborhood. Two mins later, told in no uncertain terms to leave area.”

“‘Civilians are cleared out of house. All officers be aware long guns were used. I want cover!'”

“My night: reporting on what was in front of me…until news producers realized what I was doing. Then spent hrs talking to them. Blech.”

Of course, outside of Mnookin the Twitter reports were the usual unfounded speculation. One report that really had legs involved a missing Brown University student Sunli Tripathi, who many were convinced was the “white hat” suspect due to a decent resemblance. That angle was put to rest after an official press conference released the names of the Chechen brothers responsible for killing three and injuring 170 at the Boston Marathon.

So while the networks were being cautious, careful, all petrified to make another mistake and get their already-fragile egos pulverized on social media, Twitter was the Wild West. A free-for-all only kept in check by the likes of Seth Mnookin, the Pete Williams of new media.

When Sandy hit Hoboken and water was rising around my evacuated ground-level apartment in an area that quickly was turning into Venice, TV couldn’t get me news fast enough, or more importantly, local enough.

Neither could the radio.

But Twitter, accurate or not, kept me completely immersed.

Just as it did during the most riveting night of news in the history of social media.

And if it got a few things wrong?

The Fonzie of social media…

Never having to say it’s sorry…