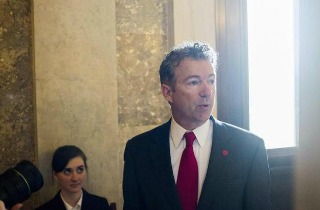 No doubt, the GOP’s libertarian wing is on the ascendancy. Within the GOP, a vibrant debate is taking place over how the party should approach social issues like same-sex marriage rights, the legalization of marijuana, and the reformation of the nation’s criminal justice and sentencing regimes. Both the public polling and the actions of Republican officeholders suggest that the GOP’s libertarian faction is successfully steering the party in their direction on those issues.

Maybe the most visible member of the Republican Party’s libertarian wing is Sen. Rand Paul (R-KY). He has advocated moderation on the above issues as a means of maintaining comity within the party and also not alienating persuadable non-Republican voters. But Paul has staked his political career on another issue, one that only emerged as a galvanizing political force in the wake of the revelations exposed by National Security Agency leaker Edward Snowden: the scaling back of American intelligence gathering practices.

Paul maintains, as do Snowden’s supporters, that the NSA’s capabilities have sprawled in the wake of September 11, 2001. Lacking appropriate oversight, the agency now has the capability to violate Americans’ Fourth Amendment rights. His message has found a friendly audience among a generation of Americans who came of age after 9/11, and for whom the concept of privacy in the online environment is a major concern. Two weeks ago, Paul became the recipient of an honor Republicans rarely enjoy when he received a ovation from an audience of 400 students at the University of California, Berkley, for his anti-spying advocacy.

The reception atypical Republican voters give Paul may be going to the senator’s head. When the President of the United States recently visited with Pope Francis in Rome, Paul tweeted at the president that he should offer up a penance for the NSA’s domestic metadata collection practices. “Forgive me father for I have spied,” he submitted glibly.

Paul’s marriage to the concept of scaling back the nation’s surveillance apparatus has been undeterred by the most severe international crisis in 25 years. Russia’s unchecked invasion of the Ukrainian Crimean peninsula may have been merely a prelude to a much bloodier campaign aimed at capturing the country’s East and South and cutting Kiev off from the sea. What’s more, the events in Eastern Europe provided the public with as clear a demonstration since the 9/11 attacks of what a dismal and ongoing intelligence failure looks like.

A report in Foreign Policy magazine on the increasing tensions in the region casts the West’s intelligence capabilities in the former Soviet Union in an unflattering light:

“Assessing the intentions of Russian President Vladimir Putin has been hampered by the fact that the U.S. has alarmingly little in the way of signals intelligence, or intercepted communications, that would indicate that he had decided to invade or when a strike was scheduled to start, one official said,” the report reveals. “Despite the tens of billions of dollars given to the intelligence community each year, the United States also has no real-time video footage coming from drones in the region and is relying largely on still photos from satellites, another official said.”

Reduced to assessing the situation on the ground in Eastern Europe by use of 20th Century means, Western intelligence agencies are finding themselves thwarted by 20th Century technology. A report in the Wall Street Journal on Thursday evening revealed that the “camouflaging” of Russian equipment and positions has “further complicated U.S. efforts to assess the size” of Russian forces gathering along the Ukrainian border. That disturbing bit of information has since been edited out of that WSJ report.

Foreign Policy notes that intelligence officials, speaking to reporters and lawmakers, have adopted a tone of urgency recently about the increasingly likely prospects for a broader invasion of Ukraine. They speculate that this may be due, in part, to the fact that some American officials were convinced that Russia would not invade Crimea in February and assured lawmakers that Russian troop movements were just posturing.

Moscow’s ability to conceal its intentions in Crimea might have been facilitated by Snowden, who currently enjoys political asylum in Russia. One of Snowden’s media-based handlers, Glenn Greenwald, said in the summer of 2013 that the documents Snowden possessed would provide their recipient with a blueprint revealing the NSA’s practices and the most effective means of evading their surveillance.

An intelligence failure of this magnitude, with implications for the future of global stability this grave, has a sobering effect on the electorate. Cute one-liners that fire up the college crowd might animate Paul’s base, but he will find – as did former Rep. Ron Paul (R-TX) – that this kind of enthusiasm among voters less concerned with stability abroad than privacy at home does not translate into votes in Republican presidential primaries.

Paul has already begun to recalibrate his position on Russia, perhaps seeing to distance himself from his non-interventionist father who has taken to defending military intervention when it is directed from Moscow. “It is our role as a global leader to be the strongest nation in opposing Russia’s latest aggression,” Paul recently wrote before criticizing the president’s response to the crisis in Europe without much specificity. He knows his position is a liability among Republicans.

But Paul cannot maintain his carefully cultivated brand as an opponent of an expansive surveillance state while simultaneously casting himself as hawk. Those two roles are mutually exclusive. Paul’s political maneuvering in 2013, which seemed so adroit at the time, now appears feckless as the forces of history reassert themselves on the Black Sea Coast. What a difference a year makes.