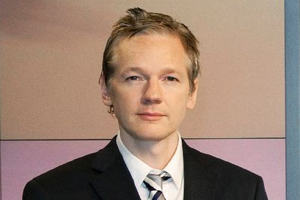 It seems Wikileaks’ latest project– a compilation of several millions of diplomatic cables replete with confidential information embarrassing to a wide array of nations– was the last straw for editor-in-chief Julian Assange. After a verbal lashing from Secretary of State Hillary Clinton, Assange is tossing the ball back into her court, telling Time he would like to see her step down. Meanwhile, his Swedish misadventures have landed him an arrest warrant from Interpol.

In a 36-minute interview from an undisclosed location with Time managing editor Richard Stengel set to be released on Friday, Assange suggested that Secretary Clinton should step down from her job “if it can be shown that she was responsible for ordering U.S. diplomatic figures to engage in espionage in the United Nations, in violation of the international covenants to which the U.S. has signed up.” He also challenged any question of legal transgression that came up regarding his organization, noting that in “over 100 legal attacks of various kinds, [Wikileaks has been] victorious in all those matters.” And as for any legal threats from the United States, Assange brushed them off: “It’s very important to remember the law is not what, not simply what, powerful people would want others to believe it is. The law is not what a general says it is. The law is not what Hillary Clinton says it is.”

The law is, however, what Interpol says it is, and right now Interpol says the law warrants Julian Assange’s arrest. Assange is one of the newest entries in their database, considered dangerous and in need of arrest immediately for “sex crimes”– presumably the charges he faces of rape and/or molestation in Sweden earlier this year.

Given the animosity from all areas of the United States government, the global community, Interpol, and commentators and politicians on both political aisles, the central Wikileaks question– whose side is Julian Assange on?– remains unsolved. His work has amounted to the most concrete evidence of WMDs in Iraq during the Saddam Hussein era than anyone else has mustered up, and reinforced the belief on the right that global warming is a farce. The latest leak is particularly damning to Iran, showing international support for American intervention there and ties to the increasingly belligerent North Korean regime. Yet many right-wing American pundits– though not all— are calling for everything from his arrest to his execution. Sarah Palin even wrote a tweet against Wikileaks, taking the gloves off and ruthlessly comparing the website to, uh, Gawker. His only unambiguous ally seems to be the nation of Ecuador, which has offered him citizenship “no questions asked,” and even that may be compromised if the nation’s arm is sufficiently twisted by the international community.

Yet none of this contradicts most of the trajectory of Assange’s career (if it can be called that). The major deviations in this news are obvious but extremely noteworthy: (a) Assange is now taking on individuals within the states that he has dedicated his life to subverting and (b) he is finally under the type of extraordinary international pressure whose previous absence made Assange’s progress in the hacker world so bizarre. The former move may be an indication that Assange realizes the magnitude of his persona, such that he is wetting his feet in the waters of impacting intra-government change. The latter is an indication that the international community may finally be taking him seriously, whether the extremely serious (and equally ambiguous) “sex crime” charge is true or not. Either way, Assange has evolved from humble genius to notoriously arrogant international supervillain, and that evolution has given him the coveted title of most powerful and most endangered high-profile purveyor of information in the world– perfect advertising for his next round of leaks.