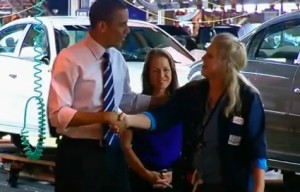 The 2012 campaign is shaping up to be one of the nastiest in modern history, with a record number of negative ads being run, with a record number of ad dollars. The Obama campaign has released a new, “positive” ad that highlights President Obama‘s January 29, 2009 signing of the Lilly Ledbetter Fair Pay Restoration Act, but is the ad’s title a subtle dig at Mitt Romney‘s humanity, or artificial simulation thereof?

The ad looks positive enough, opening with shots of Barack Obama with his late mother, and with his daughters, and a voiceover reminding voters that he’s “The son of a single mom. Proud father of two daughters.”

The ad then cuts to footage of women at various workplaces, as the narrator says “President Obama knows that women being paid 77 cents on the dollar for doing the same work as men isn’t just unfair, it hurts families.”

The family being hurt is pictured doing dishes together in what looks like a very well-equipped kitchen.

“So the first law he signed was the Lilly Ledbetter Fair Pay Act,” the narrator says, to footage of the President at the bill-signing. ”

“To help ensure that women are paid the same as men for doing the exact same work,” the ad continues, to more women-at-work footage, including a shot of the President at an auto assembly line. “Because President Obama knows that fairness for women…Means a stronger middle class for America.”

It all seems very innocuous, and the ad is a very effective appeal to women, and people who are in favor of women. The ad also signals a willingness on the part of the President to run on his record, which many of his supporters have been wishing he would emphasize.

The problem is with the title of the ad: “First Law.”

Let that sink in for a second. What comes to mind when you hear “First Law?”

There’s really only one answer: The First Law of Robotics. “First Law” is even the title of a short story in the Isaac Asimov robot canon that begat the Three Laws of Robotics. Bus-ted!

That’s right, in addition to being a fulsome tribute to the President’s first legislative accomplishment in office, this ad is a coded shot at Mitt Romney’s difficulty in relating to hu-mans as he tries to unseat Obama as our Earth Leader. The Obama campaign telegraphed this strategy early on, with remarks like David Axelrod‘s assertion that campaigns are like “MRIs of the soul,” and helped along by things like Romney’s love of “sport,” his affinity for uniformly-heighted trees, and most recently, his delight at meeting the sandwich-bot (which the Obama campaign would no doubt call a “fellow traveler”) at a Wawa store.

This kind of ‘droid-whistle politics is beneath the President, and his reelection effort. President Obama and his team ought to come out and say, once and for all, that Mitt Romney is a human male. We have the Certificate of Live Birth, after all, and who ever heard of a robot being produced in Detroit?

Rather than focus on distractions like this, the Obama campaign might have been better off highlighting Mitt Romney’s own tortured history with the Lilly Ledbetter law. The candidate’s spokespeople were famously flummoxed when HuffPo‘s Sam Stein asked for Gov. Romney’s position on the law:

You can almost hear the whirring and clicking as Stein waits for an answer.

The campaign eventually got around to releasing an email statement saying Romney wouldn’t repeal the law, but in an interview with Diane Sawyer, refused to say whether he would have signed such a law.

The Obama campaign says “First Law” is the kickoff of a “series of television advertisements that highlight President Obama’s commitment to issues important to women and their families,” but the not-so-subtle message is that Mitt Romney is not the ‘droid women voters are looking for.