Is The Media Gearing Up For Another Near Death Panel Experience?

Is The Media Gearing Up For Another Near Death Panel Experience? 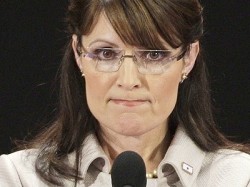 With just a little over an hour to go before Sarah Palin invades the airwaves for the forseable future now may be a good time, in the past is prologue sense, to consider the effect she had last time she invaded the Internets. Earl Blumenauer, a Democratic congressman from Oregon, penned very instructive op-ed piece this weekend about how perfectly reasonable, run-of-the-mill political decision can get hijacked by politicians (and others) looking to make a quick headline. The example in this case is the end-of-life provisions added to the health care bill by Blumenauer — you may be familiar with them under their alternate label: death panels.

Blumenauer’s timeline detailing how one became the other — with the powerful helping hand of Sarah Palin– is fascinating in a number of regards, but specifically because Palin is once again about to be handed a very large microphone. Blumenauer notes that in the all-night health care bill mark-up session of July 16 that “nowhere was there a single proposal to change the end-of-life language, nor a word spoken in opposition. Not a single word.” Enter Betsy McCaughey and Sarah Palin, and a “vicious news cycle” where “lies take on lives of their own on Web sites, blogs and e-mail chains and go viral in seconds.” In this last regard Blumenauer had less than kind words for the MSM:

The news media was a particular culprit in this drama. This was not just Fox News; seemingly all the national news organizations monitored any meetings they could find between lawmakers and constituents, looking for flare-ups, for YouTube moments. The meetings that involved thoughtful exchanges or even support for the proposals would never find their way on air; coverage was given only to the most outrageous behavior, furthering distorting the true picture.
*
It didn’t matter. The “death panel” episode shows how the news media, after aiding and abetting falsehood, were unable to perform their traditional role of reporting the facts. By lavishing uncritical attention on the most exaggerated claims and extreme behavior, they unleashed something that the truth could not dispel.

The question remain whether the news media will be able to perform its “traditional role of reporting the facts” going forward — between Palin’s book and the health care bill/Stupak amendment making its way through the Senate it may be a challenge. When everyone in the media is struggling to stay afloat, the call of a splashy headline is sometimes hard to resist.

Related: BBC’s Rome Hartman is more optimistic and thinks the viewing public won’t be fooled again: “People are smart enough to know shamelessness when they see it.” But what if that’s all they see?