Is This The Best Picture Of Rep. Bachmann Eating A Corn Dog The Telegraph Could Find? 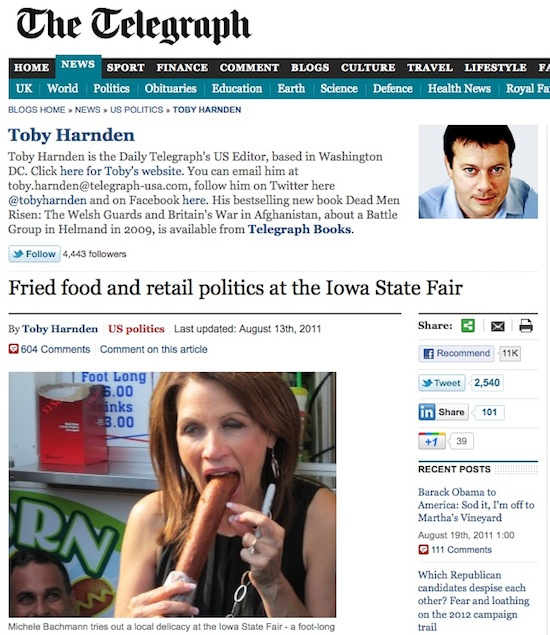 America’s pundit class hasn’t quite finished talking about Newsweek‘s “intense” cover photo of Rep. Michele Bachmann, but it’s already safe to say the UK Telegraph has found a way to grossly outdo it. In a scathing look at the Iowa State Fair that makes it sound part Rome during Lupercalia, part French Revolution mobbery, the Telegraph decided to run a somewhat blurry photo of Rep. Bachmann, mid blink, chomping on a corn dog.

The photo actually goes quite well with the article, which sounds like it was written by a high-class 17th century English fop who the Telegraph forced into a time machine and sent to Iowa because none of their actual reporters would reduce themselves to the indignity of on-the-ground coverage at a crass American “state fair,” whatever that is. Author Toby Harnden turns his nose up at everything from fried twinkies (understandable) to Tim Pawlenty‘s cowboy boots (really?). This is the opening:

On the eve of the Ames Straw Poll, the Republican candidates made a last push for votes at the Iowa State Fair in Des Moines – a huge spectacle in which cattle, pigs and horses are on display as well as politicians and Iowans queue to for fairground rides and some of the most unhealthy food on the planet (I was going to try the Fried Twinkies but the queue was, alas, too long).

But the maddening arrogance of the text will almost certainly get lost behind the photo– one that would work well in a slightly trashy campaign ad but is obviously not fit for print. As what reads like a hasty attempt to justify using it, Harnden ends the piece by noting that Bachmann drove away on a golf cart with her husband, buying the corn dog and “after applying mustard and allowing Mr. Bachmann to take the first bite, she chomped into it with gusto.” This is highly salient to the piece, apparently, as a cultural note: in America, presidential candidates eat “some of the most unhealthy food on the planet” (the correct word is “unhealthiest,” by the way) and drive golf carts and have husbands who get first dibs on whatever disgusting thing the lady’s having. Oh, those Americans– so quaint!

But it’s not hard to see how her supporters– and even some of her detractors— can begin to see a deliberate attempt to undermine the one characteristic Rep. Bachmann has that no one seems to disagree with: she’s photogenic. There are photos of all the Presidential candidates that are equally unflattering, because, as has been explained many times by many critics, photographers often take a rapid series of photos to get the best shot. It’s difficult to believe that professional photographers are this bad, or that Rep. Bachmann is simply difficult to photograph in the wild.

Then there’s the sexist subtext here: would the Telegraph have run a similar photo of a presidential candidate consuming an obvious phallic symbol if said candidate were male? Phallic symbols make for good comedy, sure, but the Telegraph is not Mad Magazine, and there appears to be no intent at humor here, only degradation. The image sends a clear message to any woman thinking about pursuing such high public office: we at the Telegraph are unable to look at you as anything but a sex object, no matter what your qualifications for office. That’s not to say the decision to public such a photo is always innately sexist– some outlets clearly would have run the photo no matter who was in it, particularly on the internet (looking at you, Wonkette). Whether a print publication– a British one with no theoretical reason to work for or against any American candidate– would have is an entirely different question, one that we can expect to get addressed often among conservative commentators in the near future.