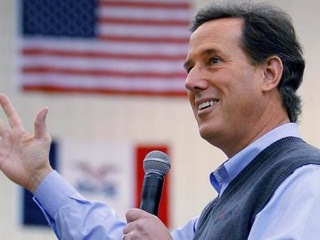 The Rick Santorum presidential bid isn’t going so well, but it probably didn’t need this: a report from the Italian magazine Oggi, as aggregated by the Daily Beast, giving a visit to some confused and somewhat outraged communists in the old country who don’t really understand what their cousin is doing running a socially conservative campaign for leader of the free world.

RELATED: Rick Santorum Answers Question On SOPA: ‘There Are Limits To Freedom On The Internet’

Santorum has been open about his family fleeing Mussolini in the past, but Oggi notes that a great deal of their apprehension about fascism came from the fact that they were a well-known group of “red communists to the core”:

“In Riva del Garda his grandfather Pietro and uncles were ‘red communists’ to the core,” writes Oggi journalist Giuseppe Fumagalli, likening the family to “Peppone” after a famous fictional Italian communist mayor who fought against an ultraconservative priest known as Don Cammillo and about which a popular television series is based. “But on the other side of the ocean, it’s like his family here doesn’t exist. Instead he draws crowds as the head of the ultraconservative faction of the Republican party, against divorce, gay marriage, abortion, and immigration.”

The Daily Beast concludes that his relatives love him and would be happy to see him win, despite the political differences. The Oggi website also has a very cute video interview with some older Santorums over what appears to be wine. The Daily Beast‘s take is not hostile to Santorum, and the Oggi video appears to be an interesting look at part of the family of a family values candidate, but there is a danger in the potential use of this coverage that should be immediately diffused: the impulse to use Santorum’s family against him, to mock or oppose him based on his family’s beliefs.

The why and how behind the fact that there are Santorums out there that disagree with our Republican presidential candidate is a concern alien to why such an attack should prompt an instantaneous and viscerally negative reaction from the American public. The set-up from the initial report for Santorum opponents, should they choose to take the bait, is for a meta-ad hominem attack from which no politician is safe, the natural evolution from, say, “x politician has a gay relative” or “y politician’s uncle has a DUI under his name.” It tempts the reader to ask, “if Rick Santorum is so conservative, how come people who share his blood are communists?” the same way the aforementioned draw the reader into wondering how a politician could uphold certain virtues when his or her genetic material has produced in others such radically different results. It flies in the face of everything Americans are taught defines the ethos of their nation: that individuals define themselves and immutable traits don’t matter.

Many will contest that Santorum judges immutable traits in the same manner through his social conservatism, but that vision proves myopic regarding the template of the argument, particularly with the children of immigrants. If this argument is accepted as valid and radically derails the already fumbling Santorum campaign, the next target for such an attack is pretty clear: Sen. Marco Rubio, whose parents fled a turbulent situation in Cuba amidst a communist rebellion. Countries like Cuba are too small for someone not to be related to another of the opposing faction. There is little doubt that, somewhere on the island (or in Moscow, where many children of communist sympathizers were sent to study if they were good little pioneers) Sen. Rubio has a distant cousin who must at least nominally believe in the “revolution.” And the media hasn’t been averse to grotesque attacks based on his past before.

Nor would Republicans be the only ones under attack, lest it appear I be making the argument that the Republican Party is the party of immigrants and exiles. Expanding the rules of political decency to allow for this sort of attack benefits and enlightens no one. That’s not to dissuade journalists from finding the color in a politician’s family or trying to get to know the candidates better, but given than anything from potential animal abuse to being a francophone, it is important to draw a line somewhere regarding what should be socially acceptable methods of attack.