Jack Bauer’s Dad Is Sick Of “This Idiot” Joe Scarborough 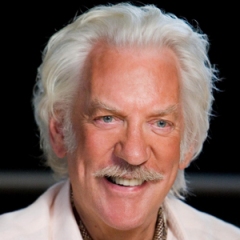 Apparently actor Donald Sutherland is a fan of MSNBC, but he certainly is not a fan of their morning show.

First, Sutherland wanted to make clear that he likes most of MSNBC. He enjoys the “refreshing afternoons with Chris and Ed,” relishes the “clarifying sensibilities of Rachel and Keith.” But Scarborough? Oh my:

Who is this idiot? Why is he there? He can’t even listen. He doesn’t conduct a decent conversation. He runs over everyone else’s words with a landslide of diarrhea. I saw him on Friday, stomping around the stage like a posturing rooster, calling Paul Krugman a political hack. Paul Krugman’s a political hack? Surely they put make-up on Mr. Small Mouth. Doesn’t he look in the mirror? That’s where he’d see what a political hack looks like.

Sutherland doesn’t just have blanket criticism – he has suggestions. “Go out and get the television equivalent of David Brooks to chair your program,” he writes.

This isn’t the first time Sutherland has blogged for the Huffington Post, but it’s a rare occurrence. He last wrote in August, and before that, was endorsing Pres. Barack Obama in July 2008.

The hit piece calls to mind another HuffPost blog, by Alec Baldwin aimed at CNN’s Jack Cafferty. But that one was at least somewhat provoked – Cafferty called out Baldwin on air. This one appears to be out of nowhere…but clearly something Sutherland has been thinking about for some time.

So, Joe – any response to Mr. Sutherland? We expect a Twitter comment by the end of the day.