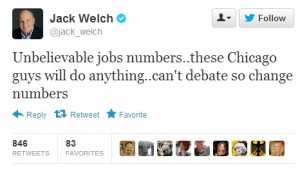 The uninformed perceptions of the voting public giveth, and the uninformed perceptions of the voting public taketh away. After exactly one day of basking in the glow of a hideous-lie-powered victory in Wendesday night’s debate, Republican presidential candidate Mitt Romney was dealt a blow Friday morning when September’s jobs report saw the unemployment rate plunge to 7.8%. Conservatives aren’t taking this lying down, led by Romney booster and former GE CEO Jack Welch, who tweeted that this is all the work of “these Chicago guys.”

“Unbelievable jobs numbers..these Chicago guys will do anything..can’t debate so change numbers,” Welch tweeted, making the job of Romney surrogates that much tougher by calling them “unbelievable,” and causing a sigh of relief from the members of the bands Styx and Foreigner, who are actually the ones behind the conspiracy to cook the jobs numbers.

The jobs numbers for September really weren’t all that great, with 114,ooo jobs added, and upward revisions of the jobs estimates from July and August of 40,000 and
At an even more immediate level, the better economic news, coming so quickly on the heels of Wednesday’s debate, could significantly blunt the polling bounce that political observers will be looking for at the beginning of next week. If Mitt 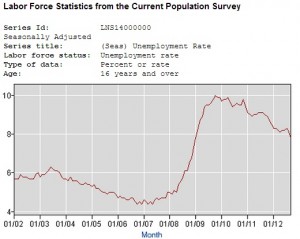 Romney fails to significantly narrow the margin between him and the President, that debate victory will become a narrative liability. Even after such a clear and convincing debate victory, the narrative will go, Americans still won’t buy the Romney dog food. 46,000, respectively, but the number that sticks with the general public, the unemployment rate, crossed a monumental symbolic threshold. At 7.8%, the unemployment rate is at it’s lowest point since January of 2009, the month President Obama took office, and the first time it has been below 8% since then. Ironically Mitt Romney’s constant drumming-in of that threshold actually makes this milestone that much more powerful for President Obama, and reinforces the President’s argument that we shouldn’t vote for Typhoid Mitt just when the fever is breaking.

Given the huge potential benefits to President Obama, at a time when he could not possibly have needed them more, Romney supporters like Welch can be forgiven their suspicions, but conservatives would be wise (what are the chances of that?) not to follow Welch down the conspiracy theory rabbit hole, lest they be seen as a. crazy, and b. rooting against the success of the American worker. Romney and his surrogates should, instead, concentrate on trying to work the word “debate” into every sentence, twice, if possible. Maybe they could work it lie a variation of the fortune cookie “in bed” game. “Good morning, Soledad, it’s nice to see you this morning at the debate,” or “Excuse me, I gotta go take a dump at the debate.”

Today’s jobs report also offers the intriguing possibility that one of the reasons the President stubbornly played it so (disastrously) close at Wednesday night’s debate is that he had an inkling that unemployment would dip below 8% in a few days, and didn’t want to risk doing anything to mess up the political benefit coming his way. Maybe what he was really writing on the pad at that podium was “7.8%, motherf**ker. 7.8%.”