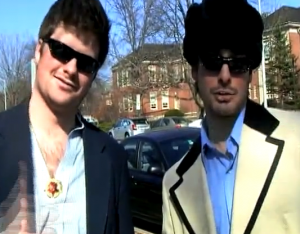 The conservative activist James O’Keefe has returned with what he describes as “evidence of government employees gladly offering public assistance to individuals representing themselves as drug dealers.” In comments recently to Fox News, O’Keefe, known for his video “stings” of NPR and Planned Parenthood among others, described his new work as “dwarfing” anything he’s done before. The first video in a series has been posted today in a story on the Daily Caller.

In the video, two men who describe themselves as Russian drug dealers talk to a woman identified as an Ohio Medicaid worker, asking if they should mention on their application for aid that they have just imported into the U.S. a McLaren sportscar with a “gold-coated engine.” They add that they need help obtaining abortions for their underage sisters, who trade sex for drugs. The woman on tape recommends Planned Parenthood and suggests leaving the car off their application:

In response, Ohio employees tasked with disbursing federal Medicaid dollars are shown coaching the men through the process of applying for benefits. “If it’s not something registered here, maybe I just wouldn’t mention it,” a Franklin County Medicaid officer named Traci Daniels tells the men, when asked whether they should mention owning a vehicle that retails for nearly $1 million, as they apply for government aid designed to help poor people. “Not that I can say that. You didn’t hear that from me. But, that would right there, that would throw him off. He would be immediately not qualified.”

It’s not clear whether any application was actually filed.

Watch it here, from Project Veritas: