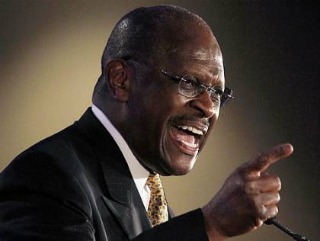 Often, when we’re nearing an election year, voters are asked which candidate they’d most want to grab a beer with. And while it might be fun to attend a Lady Gaga concert with Tim Pawlenty or go surfing with Barack Obama, former Godfather’s Pizza CEO Herman Cain seems like he’d be a lot of fun to hang out with over a drink or seven, plus there’s a good chance he’ll bring pizza. After reading GQ‘s Q & A with the Republican presidential hopeful, we’re even more inclined to want to pick his brain over a large pepperoni and jalapeño (don’t judge).

Cain kicks things off by explaining how great a challenge it is to become a known gospel singer. Even more challenging, it seems, than becoming ruler of the free world:

It’s much harder to succeed as a vocalist, and become one of the big names than it is to get elected president. That’s why I ended up running for president!

He provides a lot more money quotes too. Here are some of his Greatest Hits, if you will, from the interview: