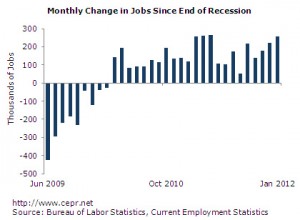 There’s good news and bad news for Republicans in January’s jobs report. The good news is, Mitt Romney was right: the economy is getting better. The bad news is that the better-than-expected news is going to make it that much harder for Republicans to unseat President Obama in November. In January, the US economy added 243,000 jobs (more than double what was expected), and the unemployment rate fell to 8.3%.

True to his word, Romney pushed back against the good news by insisting that he can do better. Here’s Governor Romney’s statement on January’s jobs report:

We welcome the fact that jobs were created and unemployment declined. Unfortunately, these numbers cannot hide the fact that President Obama’s policies have prevented a true economic recovery. We can do better. Last week, we learned that the economy grew only 1.7% in 2011, the slowest growth in a non-recession year since the end of World War II. As a result, the percentage of Americans in the job market continues to decline and is now at a level not seen since the early 1980s. Nearly 24 million Americans remain unemployed, underemployed, or have just stopped looking for work. Long-term unemployment remains at record levels. I am running for president because I have the vision and experience to help rebuild the economy and put us on a path toward greater prosperity for all Americans.

Romney’s right that something prevented a “true economic recovery,” but it wasn’t President Obama’s policies. The Republicans refused to pass the American Jobs Act, which independent estimates say would create about 2 million jobs in the near term, many of them on infrastructure projects. January’s jobs report shows, once again, steep losses (14,000) in public sector jobs, a result of the Republican obsession with cutting spending during this deep recession, which has already cost over half a million public sector jobs, and continues to bring down overall job growth. The private sector added 257,000  jobs in November, still not great, but again, more than the net job growth. The American Jobs Act also included measures, defeated by Republicans, to stem public sector job losses.

That unemployment rate of 8.3% is the lowest it has been in three years, but imagine that unemployment rate at around 6.5%, if it included those two million American Jobs Act jobs, and the half-million public workers (teachers, cops, firefighters, etc) who have fallen to the Republican austerity ax? That doesn’t even take into account the ripple effect of those wage-earners on the private sector, which most certainly would have brought that rate even lower. (Imagine, too, how that rate would look without an American auto industry.)

Even so, with a few more months like this, it will be hard for Republicans to win an election as a referendum on the economy, which means the President will get to set it up as a choice between the policies that saw this economy shedding 750,000 in a single month, or ones that have set the country in the right direction, despite the Republicans’ obstruction.