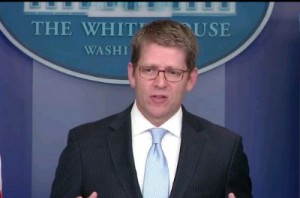 Critics of the Obama campaign’s attack on Mitt Romney‘s record at Bain Capital have called such scrutiny hypocritical, because the President has prominent donors who are also in private equity. At today’s White House briefing, Press Secretary and Birthday Boy Jay Carney (he’s 47) explained the difference between the two, and responded to former PA Governor Ed Rendell‘s latest rebuke of the campaign.

I started out by asking Carney how the President felt about Gov. Rendell becoming the latest in a line of Democrats to pile on in defense of Bain Capital. He referred me to the President’s remarks at a press conference yesterday, and echoed some of them. Although my question was really about the accumulation of Democrats undercutting the President (leave it to them to completely flip the Sister Souljah move), Carney did make an interesting comparison of Americans to “shareholders.”

“The President’s job is not just to maximize profits of a few,” Carney said. “It’s to look out for all the shareholders in America, in other words, all American citizens.”

I then asked Carney to respond to the charge that it’s hypocritical for the President to attack Mitt Romney’s record at Bain Capital, yet raise money from private equity donors like Blackstone Group president Tony James, and top Obama bundler Jonathan Lavine, currently a managing director at Bain. It was a question that a campaign spokesman inexpertly dodged last night, but that Carney nailed.

“Those folks aren’t running for president,” Carney responded. “They do not believe that their experience in their line of work wholly qualifies them to sit in the Oval Office, and be Commander-in-Chief, and make the kinds of decisions on the economy that the President must make.”

“He (the President) appreciates the support of Americans from every walk of life,” Carney continued, “every area of the economy, and as I’m sure you know, you reported on it, the fact of the matter is the President’s support, as demonstrated by contributions, comes demonstrably from small, people who just give a little bit, they’re not from huge donors.”

It’s true that the President receives large sums from well-heeled donors, but the President has consistently been beating Mitt Romney by a country mile in apples-to-apples small donor comparisons, which should give voters a clear picture of who President Obama’s “shareholders” are, and who Mitt Romney’s are. The picture becomes that much clearer when you factor in the huge gulf between the two candidates in SuperPAC donations.

That, as much as anything else, probably answers Jake Tapper‘s followup question.

“To follow on Tommy’s question,” Tapper asked, “Why would you conclude, or why would the White House or the president conclude that because Mitt Romney ran his private equity firm a certain way that he would run the country the same way? He’s — Mr. Romney has talked about experience that he has from that. That doesn’t mean that he would then start taking the same actions as president, right?”

Carney’s response was, essentially, because Romney says he will. “The former governor himself as said as much. He’s not running, that I can tell, on his record — or that you can, because he hasn’t — on his record in Massachusetts. He’s running as a businessman who can do for America what he did in private equity. And that, I think — I think Americans would expect that that credential deserves some scrutiny.”

Mitt Romney’s record at Bain Capital is a deep well, and those who think that the likes of Ed Rendell and Harold Ford, Jr., are going to deter the President’s campaign from pressing this line of attack are deluding themselves. If the President gave up every time a Democrat tried to undercut him, he’d have never graduated kindergarten, where, I’m sure, some other Democrat felt “uncomfortable” with the use of macaroni in sculpture.