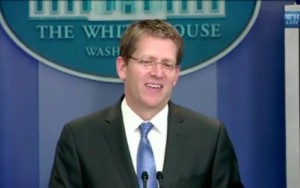 Assuming Congress passes the “less than satisfying” (in much the same way that Habanero Eyedrops are less than soothing) debt ceiling measure that puts an end to the Tea Party-invented default crisis, this week will mark the Dawn of Doomsday Politics™, an era in which all bets are off, and the immolation of our way of life has become a political bargaining chip. At Monday’s White House briefing, I asked Press Secretary Jay Carney why the President even allowed this conversation to happen in the first place, and how he might deal with the default threat when it comes up again, in his second term.

The President has called, all along, for a balanced approach to debt and deficit reduction that includes revenue increases from wealthy individuals and corporations, but the so-called compromise contains no revenue enhancements. It does create a “Super Congress” (we’re gonna need a bigger phone booth) that will be charged with achieving further deficit reduction, and the theory is that their plan will contain revenue. If Congress fails to pass the “Super Congress” legislation (which will not be subject to amendments or filibuster), deep across-the-board ($1.2 trillion, half in defense, half non-defense) will kick in, which the White House believes gives both sides a powerful incentive to reach a deal. For the time being, though, the 72% of Americans who wanted revenue to be part of the deal have won “the check’s in the mail.”

The President got a deal that ensures that the debt ceiling won’t be held hostage again until after the 2012 election (although it does give the GOP two chances to vote against it after they voted for it, a weird inversion of the John Kerry equation), and gets to take credit for ending a crisis that never needed to exist.

Carney called the measure a “victory for the American people,” mainly because a catastrophic default was avoided. He didn’t mention it, but the measure also doesn’t give Republicans the right of primae noctis, so there’s that, too. (We should still check the fine print on that one.)

Since this crisis began, I have wondered why, if the consequences of a default are so catastrophic, did President Obama even entertain the notion of allowing such a threat to be used as leverage in a policy fight. I mean, the President has the nuclear codes, but would the people (or the press) ever let him get away with using the nuclear football as leverage to score, say, a public option for health insurance?

The threat of Doomsday Politics is not over, even if Congress passes the compromise, and even if the Super Congress can overcome Tea Party kryptonite. There will need to be another debt ceiling increase in 2013, and who knows what it will cost us then? I asked Jay Carney why the President didn’t just heed the WOPR and refuse to play, and whether he might take that approach the next time this comes up.

Tommy Christopher: First of all, throughout this process, you and everybody sane pretty much has agreed that the threat of a default was a catastrophic one.  So I’m wondering why the response from the outset wasn’t, well, we can talk about what you want after you put the pin the back in the grenade.  And what are the chances that that’s how the President will respond when this comes up in his second term?

MR. CARNEY:  I like the phrasing.  (Laughter.)  And I like the notion — the confidence that we’ll be discussing this in early 2013.  I honestly haven’t lifted my sights to the horizon there to anticipate what that discussion or what that debate will look like.  Clearly, as all of you have noted in your pieces, this debate will continue about the broader issues between Democrats and Republicans and the President and his opponent, when there is one.  There’s no question that debate will continue, and the President looks forward to that debate as we move towards next year’s election.

What was important is that this action be taken and that Congress acts today and tomorrow to ensure that we do the right thing by our economy and by the American people.  The political debate around this will obviously rage on next year and beyond, and that’s the nature of our politics.

Tommy Christopher: But, I mean, why even let that political issue get tied to a doomsday thing like the debt ceiling?  Why not just say we’re not going to talk about that?

MR. CARNEY:  Well, we obviously — I don’t — the reality is that statutorily Congress had to — has to act to raise the debt ceiling.  You’re correct that in the past, while it has sometimes been an unpleasant vote for members of Congress, it was not used in this way — and we found that unfortunate.  But that was the reality that we face.  And through this process we were able to accomplish some important goals, including extending the debt ceiling through 2012, but also achieving the kind of upfront deficit reduction we believe is significant in a way that’s balanced between defense and non-defense discretionary spending and create a mechanism that allows hopefully for the enactment of further balanced deficit reduction through entitlement reform and tax reform.

I confess, I phrased the question that way in part to aggravate my friends on the right, but also to try and get Carney (and maybe the Boss, if he’s listening) to really visualize what the next debt ceiling crime scene will look like, based on this precedent. It’s also worth noting that the only way there will be another debt ceiling fight is if Barack Obama is reelected. It’s almost worth putting a Republican in the White House just to hear the Ricochet Rabbit sound effect that will attend the Congressional GOP’s desertion of the debt ceiling issue if President Bachmann asks for an increase.

The fact is, the Democrats wouldn’t turn around and do the same thing that the Republicans did, and hold the economy hostage to defeat a Republican president, and while that’s probably what many liberals hate about the Democrats, they should also be a little bit glad. Dog Day Afternoon was a good movie, but a terrible model for government.