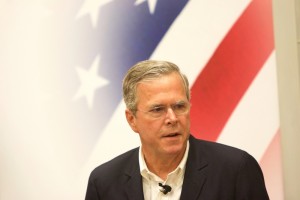 When Jeb Bush took the stage two weeks ago at the CNN Republican Debate, he and his campaign were probably looking to score some points in his already slipping poll numbers.

However, if yesterday’s FOX News poll is any indicator, Bush may have fared better if he had skipped the event at the Ronald Reagan Library altogether. The former Florida Governor’s net favorability ratings among Republican voters has now slipped to +1; to put this figure in perspective, clamoring candidate Chris Christie scored a +4, while unlikely frontrunner Dr. Ben Carson is damn near off the charts with +50.

The Washington Post is calling this the “make or break time” for Bush; certainly the unexpected announcement that House Speaker John Boehner would vacate his position has left many Republican establishment voters looking for Bush to claim territory, or risk losing further momentum.

Of course, his campaign is certainly well armed for the long run battle. Don’t forget, it was for this reason that Bush waited so long to enter the race in the first place as a means of securing funds (over $100 million in many estimates). A big party name and well-endowed coffer will help stem the tide of Bush’s struggling poll numbers. With Wisconsin Governor Scott Walker now out of the race, Florida Senator Marco Rubio may very well be poised to steal some thunder from his longtime-mentor if Bush cannot sway national opinion.