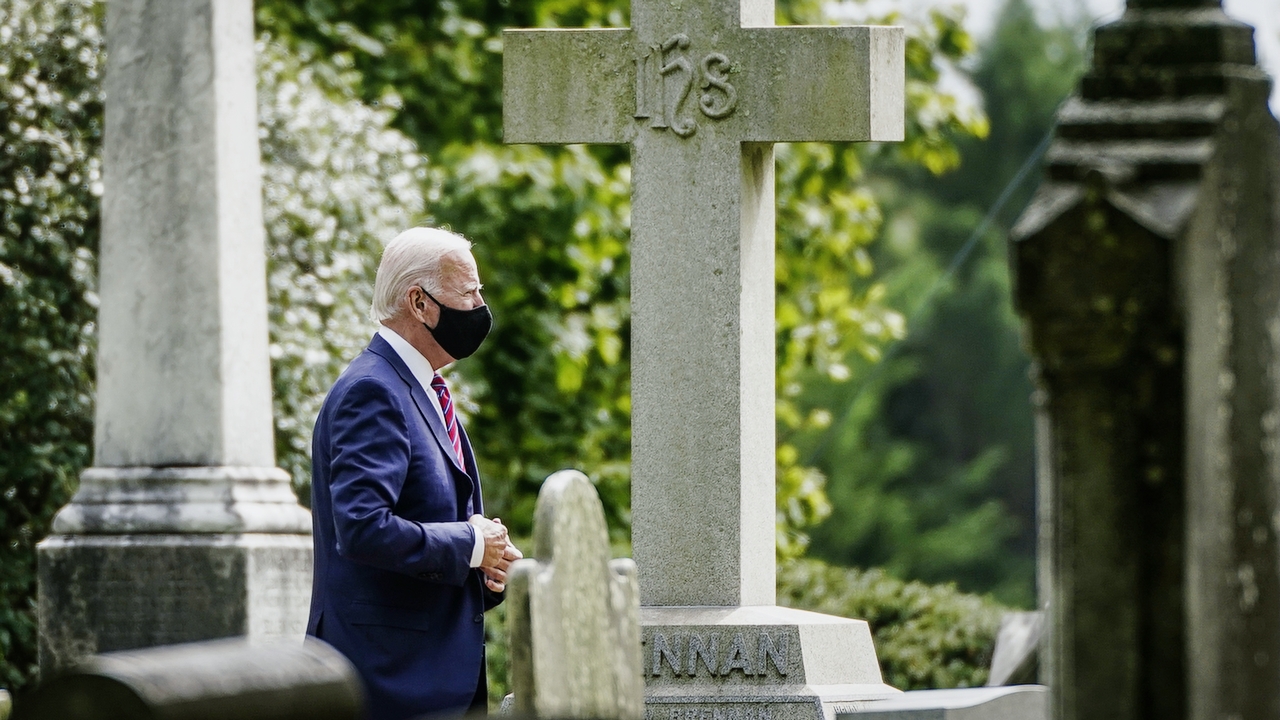 The Washington Post got kicked all over Twitter — including by Jen Psaki — over a weird post suggesting President Joe Biden is some kind of grief addict who’s getting bashed for spending too much time at funerals, or something.

On Friday night, the Post published an article by Annie Linskey — who once tweeted a photo of Biden visiting his family’s graves with the caption “Biden goes to church and walks through a graveyard in Wilmington as his legislative agenda is dying in Washington” — entitled “Biden, funerals and a bygone America.”

It was a deeply weird deep dive into Biden’s funeral habits that was pegged to his attendance at former Senate Majority Leader Harry Reid’s funeral this weekend. The substance of the article is that Mr. Biden demonstrates deep care for grieving friends and colleagues, but it frames those qualities as alien, and lightly implies there’s a downside to them.

“If a president’s most valuable resource is his time, this one has made a particular point of setting aside hours to grieve, console and mark the friendships he’s built over his roughly half-century in public office,” Linskey writes, after tallying some of the many hours Biden has spent on the departed — “All while running the country.”

Linskey also wrote this weird line framing grief as a contest between the president and First Lady Dr. Jill Biden: “Biden’s ability to stretch his schedule to accommodate the events at times surpasses his wife’s. ”

The article is merely strange, straining at a point that it doesn’t quite have the stomach to make because the alternative would be to simply report that Biden is a deeply empathetic and considerate man.

But the Post’s Twitter account put a finer point on it, tweeting “Biden, who heads to Sen. Harry M. Reid’s memorial Saturday — his seventh as president — uses funerals to honor his friendships and make a point about bipartisanship.”

They added “Not everyone thinks it’s the best use of his time.”

Biden, who heads to Sen. Harry M. Reid’s memorial Saturday — his seventh as president — uses funerals to honor his friendships and make a point about bipartisanship.

Not everyone thinks it’s the best use of his time. https://t.co/V520OW2JnL

Not a single quote in the article suggests this, a fact for which the Post was rightly excoriated by media figures and other Twitter users — including White Houe Press Secretary Jen Psaki.

“I will wait here for the apparent growing chorus referenced here who are opposed (that is right opposed according to this tweet) to a @POTUS who honors the lives of those lost, with empathy and grace,” Psaki wrote.

I will wait here for the apparent growing chorus referenced here who are opposed (that is right opposed according to this tweet) to a @POTUS who honors the lives of those lost, with empathy and grace. https://t.co/MrhLyIAAHa

Others joined in, including a few journalists trying to defend the article while denouncing the tweet:

What? Seriously @washingtonpost? Be better than this. What separates @POTUS @JoeBiden is his decency, humanity, and empathy. These are the qualities America needs more of if we are ever going to save Democracy. Thank you President Biden for always being who you are.

This tweet is bad and does not at all reflect the tone of a wonderful piece by my colleague @AnnieLinskey, who reported out a nuanced portrait of a uniquely empathetic president.

I recommend you all read it instead of dunking on a poorly written tweet. https://t.co/RbChYZzFqO https://t.co/JnolE9CNk1

It’s hard to believe this is a real article. But considering the same person once tweeted this, it makes sense.

Not everyone thinks this is the best use of the Washington Post’s time. https://t.co/f0J4Oh9FEy

Was not expecting the twist at the end of this tweet. We’re doing the both-sides thing now, even for funeral attendance? https://t.co/MOX5CgS7Eg

**not one person** in the article thinks this is a bad thing.

How could someone possibly write a negative article about this?

That they were able to figure out a way to do so speaks to what must be extraordinary pressure at WaPo not to write anything positive about the man https://t.co/v4mNkzKNkp

Now going to funerals is bad for Biden?

I really try to refrain from the media critiques on here because much of it is absurd, but my god, come on. https://t.co/UqR9yR8EfW

Shorter Post: Joe Biden is a good man who believes it’s important to pay tribute to his friends when they pass, and support their families. Here’s why that’s bad for him… https://t.co/xwpO4CPSMz pic.twitter.com/iGtvlkkiLI

This article is much better than the framing of this tweet suggests. https://t.co/FqcHKuuwFM

As of this writing, the tweet is still up. 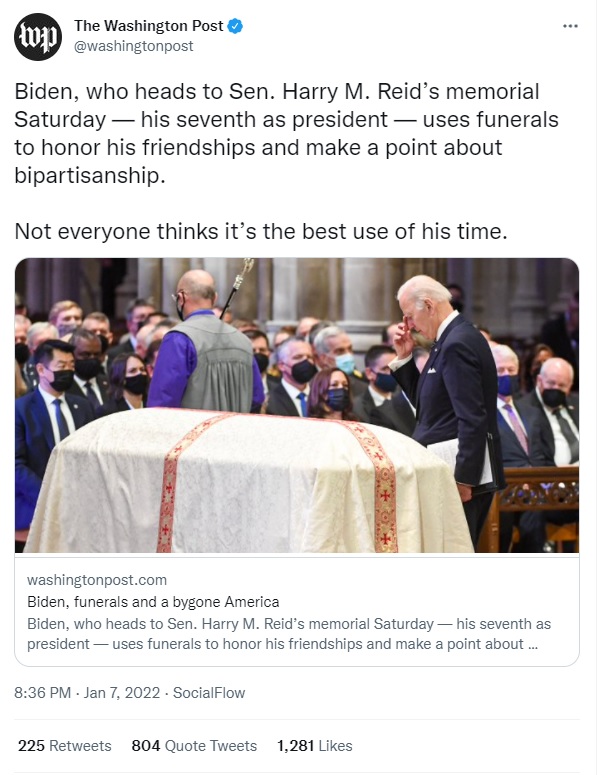 Update: They deleted it with this notation:

We’ve deleted a tweet that inaccurately represented the scope of the story.