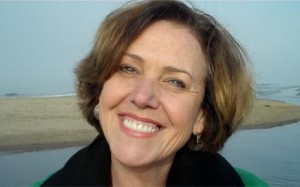 Salon.com columnist and MSNBC contributor Joan Walsh took aim at The Daily Caller publisher Tucker Carlson today, blasting him as a “spoiled rich kid” over his remarks to Sean Hannity that the White House “can’t not give us a pass!”

Walsh paints Carlson as a child of privilege with a sense of entitlement, but it’s her choice of closing insult that was interesting, as she argued that Carlson makes even Mitt Romney seem “tough” by comparison.

Is there anything funnier than listening to Tucker Carlson whine about why the White House “can’t not give us a (press) pass!” in the wake of Neil Munro’s prep-boy heckling of President Obama?

Can you say entitlement?

This may be a rare occurrence, but Walsh and Carlson are both right. The White House really can’t not give The Daily Caller a press pass, but that has nothing to do with Carlson’s rightly-identified sense that he’s entitled to it, or that The Daily Caller is just too big for the White House to cross. They give World Net Daily a pass, too. The awesomeness of your website, or lack thereof, has nothing to do with it.

Walsh goes on to inventory the milestones of privilege in Carlson’s life, including what she calls “wingnut welfare,” the millions of dollars that Rick Santorum’s pet billionaire, Foster Friess, has poured into The Daily Caller.

Still, criticizing Tucker Carlson for being smug and entitled is like complaining about the sun for shining. That privileged swagger is the very key to Tucker Carlson’s appeal, such as it is.

What sets Walsh’s critique apart is her comparison of the Daily Caller publisher with Republican presidential candidate Mitt Romney:

Carlson actually makes Mitt Romney look good, like a tough guy who raised himself up by his bootstraps. Yes, Romney was the son of a governor; his father made a fortune in the auto industry. But like him or not, Mitt Romney succeeded on his own as well, rising at Bain Consulting to run Bain Capital. It’s not a career that shows a lot of social conscience, but he had to be good at it in order to acquire (and often downsize) so many different American companies. He’s not a job creator, but he certainly created a great job for himself, and he was apparently excellent at extracting big fees and profits from the companies he worked for. Carlson is excellent only at being the poster boy for spoiled rich kids everywhere.

I’m not sure who should be more irritated by this, Carlson or Romney. The truth is, their shared sense of entitlement and ignorance of their own privilege are detrimental to America in similar ways. As CEO of Bain, Mitt Romney ignored the consequences of his actions to the less privileged, in pursuit of maximum profit. Some people got fired, some other people got hired, but none of it mattered to the bottom line.

In Carlson’s case, he has ignored the toxicity of his site’s race-baiting reporting in a never-ending quest to garner clicks, the currency of his realm, and has now elevated the personification of the resentment he peddles to heroic status. That’s because, like Mitt Romney, Tucker Carlson is above it all. He doesn’t have to live in the world he soils.