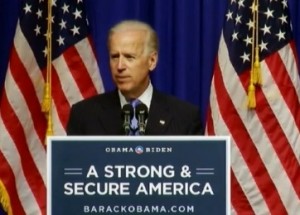 “I was a little more direct,” said Biden. “We will follow the SOB to the gates of hell.”

Here’s that prtion of the speech:(transcript via The White House)

But I think nothing speaks more powerfully to the differences between President Obama and Governor Romney than one of the defining moments in the past four years, the hunt for Osama bin Laden.  In 2008, while campaigning for the nomination, Governor Romney was asked what he would do about bin Laden.  Let me tell you exactly what he said, and I quote.  He said, “there would be very insignificant increase in safety,” then he went to say, “if Bin Laden was brought to justice.”  He then went on — that’s a quote.  He then went on to say, “it’s not worth moving heaven and Earth, spending billions of dollars just to catch one person.”

Here’s how candidate Obama answered that question.  He said, “if I have Osama bin Laden in our sights, I will take him out.  I will kill bin Laden.  We will crush al Qaeda.  This has to be our biggest national security priority.”

I was a little bit more direct.  I said, we’d follow the S.O.B. to the gates of Hell if we had to.

The Vice President made repeated references to the killing of Osama bin Laden during the speech, at one point telling the crowd “If you are looking for a bumper sticker to sum up how President Obama has handled what we inherited, it’s pretty simple:  Osama bin Laden is dead and General Motors is alive.”

While the campaign has already signaled its willingness to trumpet its success in the artist formerly known as “The War On Terror,” it is Romney’s past statements on the slain Al Qaeda leader that gives them their best opening. The line about not moving Heaven and Earth is actually not the worst of it. Not even close.

Romney talks a good game these days, telling NBC’s Chuck Todd “I think in a setting like this one where Osama bin Laden was identified to be hiding in pakistan, that it was entirely appropriate for this president to move in and to take him out,” adding that “In a similar circumstance, I think other presidents and other candidates, like myself, would do exactly the same thing.”

However, in 2007, Romney sang a different tune, one that could not be more perfect for the Obama administration to draw a contrast between how the President handled bin Laden, and how a President Romney would have.

In 2007, then-Senator Barack Obama made this promise:

While Barack Obama’s rivals attacked him vigorously over the statement at the time, not all of them did so on the basis of opposition to unilateral action. Then-Sen. Joe Biden didn’t have a problem with Obama’s plan, just with the fact that he said it out loud:

Asked if Obama’s speech this a.m. was a good idea or showed the junior senator’s inexperience in foreign policy, Biden said: “Yes.” Asked again, Biden elaborated, saying “I’ve been proposing we pursue al Qaeda in Pakistan for five years.” Biden went on to say that the “last thing you want to do” is announce to the people of Pakistan that you’re going to violate their sovereignty.

What did Mitt Romney say then? A source from Priorities USA Action points out that he said this to Reuters at the time:

While Americans might not be scared witless of terrorists anymore, the Obama campaign can use Romney’s timid statements on bin Laden to cast doubt on his qualifications as Commander-in-Chief. Based on them, it sounds like it would be President Romney making that 3am phone call, to ask someone else for permission to act.