As the battle to control the post-VP debate narrative rages, conservative media outlets have seized upon several wispy-to-nonexistent straws in order to create their favorite kind of reality, an alternate, fake one. Following Thursday night’s debate, there were only two actual, scientific polls taken, one of which gave Paul Ryan a narrow victory over Vice President Joe Biden among all debate watchers, the other of which saw Biden defeat Ryan handily among uncommitted voters. That didn’t stop Breitbart.com from reporting on two other polls, one of which Biden is now winning, while the other still doesn’t exist.

We all have our opinions and analyses of who won the debate, but polls, for what they are worth, are tangible, fact-based things. Following last night’s debate, a CNN/ORC poll of all debate viewers put Paul Ryan ahead of Vice President Biden by a slim 48%-44% margin, while a CBS News poll of uncommitted voters among the debate audience made Biden the victor by a 50%-31% score. That makes Biden the winner, with an average of 47% to Ryan’s 39.5%, if you want to look at it that way, or you could be like the mainstream media, and give the tie to the guy who smiled less.

Here’s the problem: Joe Biden is winning that poll, 48% to 47%.  Here’s the other problem: it’s not a real poll, it’s an online poll of web-surfing Rick Santelli fanboys that means absolute bupkes. Biden is probably only winning because liberals saw that Breitbart.com based its headline on a tweet from CNBC about a worthless online poll, and went there en masse to tip the scales. Plus, Biden totally crushed Ryan.

It gets better, though. Breitbart.com then “reports” on an Associated Press post-debate poll, using a super-reliable source:

According to Twitter, the Associated Press also has Ryan winning tonight by a spread of 51-43. I am looking for the link. That would be three polls showing him as the winner.

According to Twitter? That’s like saying “According to sound, Joe Biden won the debate.” Twitter isn’t a person, it’s a series of tubes, it can’t say anything by itself. So, how did that sourcing go?

***2ND UPDATE: I’m now reading on Twitter that the AP poll mentioned in the update below is not real.

I can’t be sure, but I think that’s when the picture of Joe Biden and Paul Ryan started laughing at Breitbart.com: 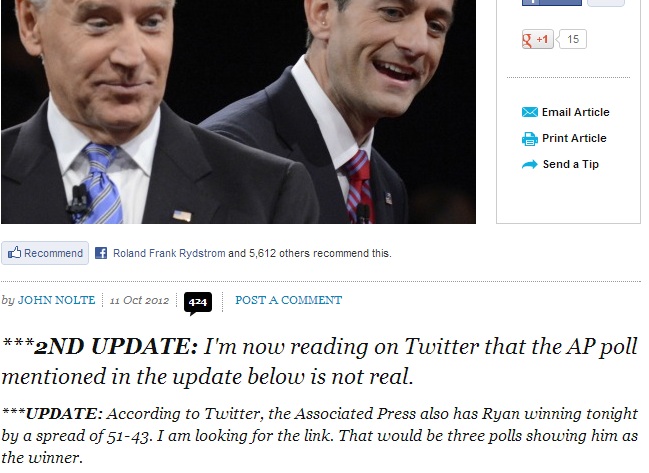 As it turns out, that “AP poll” was actually another online poll that the Topeka Capital-Journal stuck next to an AP article about the debate, so Paul Ryan did great in Kansas. Who knew?

Look, I want Joe Biden to be the clear winner as much as these guys want Paul Ryan to be, and I can make a great argument to that effect, but the facts are the facts, for what they’re worth. If Paul Ryan knew that, maybe he wouldn’t be getting crushed in that CNBC poll.