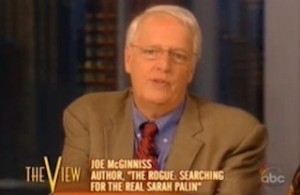 As part of the promotional tour of his unauthorized and scandalous Sarah Palin biography The Rogue, author Joe McGinniss appeared on The View today. The discussion inevitably turned to rumors of whether or not the former Governor of Alaska is, in fact, the birth mother of young Trig Palin, as has been suggested by such notable “Triggers” (the moniker, derivative of the “birther” conspiracists, that has been applied to Trig doubters) as Andrew Sullivan, among others. McGinniss walks through what he clearly seems to think is a suspicious course of events leading up to Trig’s birth, before dismissing the very rumor that he just amplified. Perhaps this is the reason many are not taking him seriously?

The following clip opens with a very uncomfortable moment in which McGinniss responds to Barbara Walters interrogation over what she thought to be the “worst thing” written in his book. Walters said:

But the worst thing, to me, that you said was that the Downs Syndrome child, Trig, may not be hers. You said — you don’t believe this yourself but you printed it because — you said she flew back from Texas to Alaska with the amniotic fluid dripping and she didn’t look pregnant and, therefore, in your mind you raise the fact that this may not be her child.

McGinniss was apparently unaware that Walters has never had a child herself, having suffered three miscarriages, so his response, “Barbara, you’ve been pregnant, haven’t you?” left the co-hosts of The View aghast, to put it mildly. But McGinniss can be forgiven for not knowing Walters’ own personal history; what he cannot be forgiven for is how clearly and aggressively he is amplifying what he seems to see as a false rumor.

McGinniss’ explanation of the questions surrounding the birth of Trig stems from Palin’s water breaking while on a trip in Texas, then traveling 20 hours to her own doctor to give birth, as though that is some sort of impossible concept. It’s not. From my very own experience, my wife’s water broke before she went into labor, and we felt no need to rush to the hospital at a moments notice. Our doctor had even informed us that we should get to the hospital within 24 hours so as to avoid risk of complications from the lack of amniotic fluid. Many women lose amniotic fluid before going into labor, and therefore do not feel the urgent need for medical attention, particularly a woman that has “been through the wringer” of having given birth to four other children before.

But it makes no sense for McGinnniss to include such an explicit narrative that details the questions and “mystery” surrounding Trig’s birth if, as he claims on air, that he himself doesn’t believe the rumors to be true. The only reason, that I can conclude, that he would share such a conspiracy theory is because he has an anti-Palin agenda to promote.

Let me also head off the inevitable wiseguy criticism by pointing out that the difference between McGinniss’ irresponsible amplification of the Trig rumor and this post is that I am bringing full-throated skepticism to the conspiracy, and doing so in response to McGiniss. It’s the difference between a punch and a block.

Which brings us back to why many aren’t taking this biography, or writer, very seriously.

Watch the clip below, courtesy of ABC: