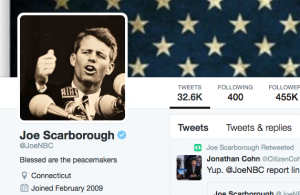 It’s been generally known for months that Donald Trump‘s position on the use of nuclear weapons doesn’t quite jive with the positions held by the vast majority of global leaders. Back in December, he whiffed hard when he said he didn’t know what the nuclear triad is. Days later, his spokesperson Katrina Pierson asked what good it does the United States to have this sort of weaponry if we are “too afraid” to use it.

For whatever reason, though, people were absolutely shaken yesterday when Joe Scarborough dropped a knowledge bomb during Morning Joe. He said that he knew that during a national security briefing months ago, Trump asked three times why America can’t just use its nuclear arsenal. By “for whatever reason,” of course, we mean, “because he is now the Republican nominee and Scarborough seemed to sit on this tidbit for months when he should have spoken up.”

The topic got play all day yesterday. From social media to other cable news shows, everyone seemed to be talking about whether we can trust Trump with the nuclear codes. Campaign chair Paul Manafort tried to slap it all down to little avail.

At the center of all of this is Scarborough, who tweeted the following messages today:

1. The conversation with source was on background, not for attribution. https://t.co/nETEZKGK0G

3. You can believe Paul Manafort’s version of events or mine. https://t.co/nETEZKGK0G

4. I believed the public had a right to have the facts I had. Now they do. They can believe the info or dismiss it. https://t.co/nETEZKGK0G

5. I’m on vacation with my kids for a few days. Seacrest out.

In a very bold move, Scarborough used each of his tweets to link to this Think Progress article titled, “9 Terrifying Things Donald Trump Has Publicly Said About Nuclear Weapons.” The whole display was brave, in fact, given that Scarborough knows that Trump watches his show, monitors his Twitter, and isn’t afraid to go off on him even though they have long been friendly.

Bonus points for the “Seacrest out.”