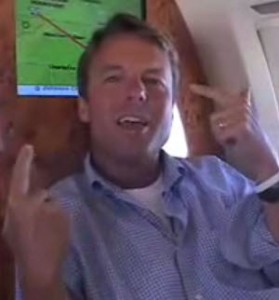 The New Republic just published a piece by Gabriel Sherman documenting how John Edwards spends his endless hours of spare time now that his political career has been chucked in the wood chipper. Jogging on the beach in North Carolina, taking lengthy lunch breaks at Wendy’s, and partying with drunk Duke coeds are just a few of his hobbies.

This new life seems pretty on-par with the lifestyle of the average Man of Leisure, ousted from a high profile job and filling his days with whimsical thoughts about “getting into law” that never really come to fruition. But a close reading of the article draws a parallel to another shamed media darling – a certain redheaded temptress known to be sporting a SCRAM anklet these days.

Getting blacklisted after making Jane Fonda wait around on the set of a flop movie isn’t exactly the same as fathering an abandoned lovechild, but besides the initial quakes that led to the crumbling of both Lindsay Lohan and John Edwards’ careers, the downward trajectory that followed both events seems strikingly similar.

Like Lohan, whose late-night club romps are now the stuff of legend, Edwards found sanctuary in the darkness of the dance floor. At the aforementioned Duke party, Edwards reportedly sipped on white wine and light beer and cut a rug to the incomparable classic “Rump Shaker” by Wreckx-n-Effect. An attendee of the party says the former politician was “just happy to be with people who weren’t going to judge him.” (Sidebar: everyone who dances to “Rump Shaker” is judged.)

And then there’s the matter of the incriminating video footage of Lohan and Edwards that only added fuel to the bonfire engulfing their careers. When the story of Edwards’ affair with Rielle Hunter broke, rumors about a sex tape quickly followed. Lohan herself has been the subject of several sex tape rumors, but it’s that now-unwatchable video from 2007 which allegedly showing her doing coke that did the most damage to her image.

The comparisons aren’t all negative: Edwards did volunteer work in El Salvador and jetted to Haiti with Lohan’s onetime party pal Sean Penn to help the post-earthquake relief effort, and she went to India to film an exposé on sex trafficking – that may or may not result in her being banned from the country. Woops!

Okay, so saying John Edwards is spiraling down the same path as Lindsay Lohan might be a stretch. But the New Republic article didn’t leave much to the imagination when describing Edwards as a lost soul with an affinity for flirting and bar hopping. And if that doesn’t sound like the description of a fallen Hollywood starlet, what does?