Johnson: Trump’s Only Watching the Olympics to See ‘How High the Mexican Pole Vaulters Go’

Johnson: Trump’s Only Watching the Olympics to See ‘How High the Mexican Pole Vaulters Go’ 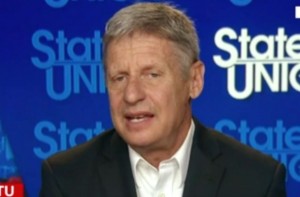 The Olympics in Rio are underway, so of course Donald Trump has offered his hopes that America’s athletes will win, win, win. The international sports competition is bound to be a point of discussion for a while, and Gary Johnson already found a way to use it to bash the mogul once again.

The former New Mexico governor has established himself up as the Libertarian alternative to the Republican nominee, and Johnson’s been toying with the mogul over the past few weeks.

During an interview with Reno-Gazette Times, Johnson quipped that if Trump watches the Olympics, it will have very little to do with rooting for America, and much more to do with keeping an eye on the ethnicity he’s antagonized the longest.

“I hear that Donald Trump is watching the Olympics tonight. He’s seeing how high the Mexican pole vaulters go,” he said. “Look, the deportation of 11 million undocumented workers starts with misinformation. They are hardworking people that have come into the Untied States and they have to come in illegally because the government can’t provide them an easy way to get in legally.”

Johnson also threw out a few jabs at Hillary Clinton, saying she is every bit as polarizing as Trump. The former New Mexico Governor outlined his proposals for cutting back on the government while embracing liberal social policies.

Johnson’s swipe is an obvious reference to Trump’s promise to build a border wall even though Mexico has said they absolutely won’t be paying for it. If Trump’s going to try to make the wall “ten feet taller,” he can figure out just how many feet high the wall should be when the pole-vaulting starts on August 13.