Jonah Goldberg: You Could Argue Carson Is ‘More Authentically African-American’ Than Obama 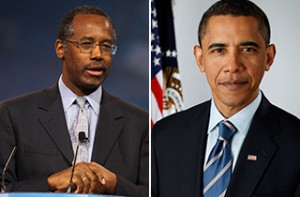 The National Review published an op-ed Friday by columnist and Fox News contributor Jonah Goldberg, who suggested that the argument of Ben Carson being “more African-American” than Barack Obama” is a valid one.

“Here’s something you may not know: Dr. Ben Carson is black,” Goldberg, author of the book Liberal Fascism, wrote, adding “The only way you wouldn’t know he’s black is if you were blind and only listened to the news.”

Goldberg wrote, “One could argue that he’s even more authentically African-American than Barack Obama”. Goldberg went on to compare the GOP candidate to the President, noting that “Obama’s mother was white and he was raised in part by his white grandparents” while Carson “grew up in Detroit, the son of a very poor, very hard-working single mother.” Goldberg described Carson’s rise from poverty as “one of the most inspiring rags-to-riches stories of the last half-century.”

Goldberg criticized the news media for attempting to hide Carson’s blackness, writing that it is “intriguingly rare to hear people talk about the fact that he’s black.” “How strange it must be for people who comfort themselves with the slander that the GOP is a cult of organized racial hatred that the most popular politician among conservatives is a black man,” Goldberg wrote, adding that liberals ignore Carson’s race because “the race card is just too valuable politically and psychologically for liberals who need to believe that their political opponents are evil.”