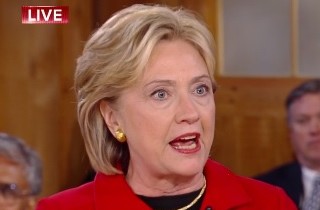 After Democratic presidential candidate Hillary Clinton attacked her Republican rival Donald Trump for his heavy-handed treatment of the press, reporters took to social media to point out that she also was taking unprecedented steps to block their access on the campaign trail.

The snarkfest began after Clinton tweeted the following, a line from her speech in Springfield, Illinois on Wednesday.

Trump has banished members of the press who have criticized him.

Is there any doubt he would do the same as president?

But reporters retorted by pointing out that Clinton’s own record of dealing with the press isn’t exactly stellar, with many noting either her literal lassoing of reporters at campaign stops or her unprecedented seven-month stretch without holding a press conference.

Not good. But not being accessible to the press is also pretty darn bad. https://t.co/ota36ykkij

You haven’t held a press conference in like 500 years. You literally corralled reporters to keep them away from you. https://t.co/HAoeCGSMZA

Why has it be months since you last held a press availability? https://t.co/edkeylwEV5

To be fair, at least he acknowledges we exist https://t.co/NK0nWDRSAs

Not sure this is a road you want to go down https://t.co/QjmxVW4doV

Hillary has a perfectly fair and evenhanded policy of banning all press from her press conferences. https://t.co/0h2gbRJ6Jo

Once again, these candidates can’t criticize each other effectively. Hillary has hidden from the press for 7 months. https://t.co/0McRloWKQ0

You haven’t given a press conference in 2016 https://t.co/dcgFE3h0kV

sorry when was the last time you held a press conference https://t.co/tzL9treMwS

From the candidate who hasn’t held a presser since December and whose team actually lassos journos. https://t.co/v3KFffutux

He should be roping them off and avoiding them like plague victims instead. https://t.co/UmbzJsqp2W