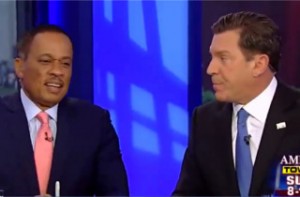 The hosts of Fox’s The Five discussed how Trump’s much-trumpeted pivot toward becoming more “presidential” and less incendiary seemed to coincide with a shift away from the party’s deeply held commitment to social issues. Specifically, Trump has criticized the controversial North Carolina anti-LGBT law and said he would want to adjust the party’s platform on abortion.

Juan Williams posited that, by rallying behind Trump even though he did not align with the party on social issues, the GOP was betraying its evangelical base.

Williams retorted that the GOP adopting such a blasé attitude toward the social issues on the party platform was tantamount to saying, “‘It’s okay for Donald Trump to do this. Hey, you evangelical Republicans, we’re so sorry….’ I mean, you can’t do that to people.”

“Wait a minute,” Williams quipped, “I thought you didn’t like the Republican Establishment.”

Dana Perino added that Trump’s “evolution may be welcome to some. It will give a lot of conservatives even more heartburn than they already have.”