Judge Not, Lest Ye Be Judged – Oh What The Hell, Keith Olbermann Has Lost It 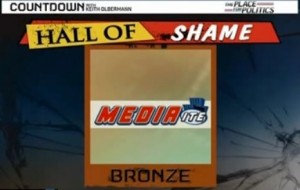 Keith Olbermann shot back at Mediaite again, alleging that we were simply “parroting” the message of a Dallas Tea Party organization who put forth a video that made Olbermann look, well, rather foolish. This time we earned bronze in a newly christened “Hall of Shame” segment, ostensibly for not rolling over to his previous assessment that we were “gullible” for posting the story. The whole scenario reminds one of an aged stand-up comedian who hasn’t updated his material in years, but is still somehow content playing to a half-filled room at the West Topeka Chuckle Hut. At some point it’s no longer funny, nor even fun. It’s just sorta sad.

To recap – earlier in the week Olbermann called us gullible for posting the clip that pointed out the MSNBC lineup — as is officially depicted on the MSNBC.com homepage — features nary one person of color. In our original post, we simply offered “judge not lest ye be judged,” which appears to have touched a nerve. That particular biblical quote continues “…For in the same way you judge others, you will be judged.”

Olbermann was calling out the lack of diversity within the Tea Party movement – because he hadn’t noticed many (or any?) people of color in his research. Not an unfair critique – however, if you are willing to go out of your way to judge the demographic make-up of an organization based on over-simplified assessments, then you should be willing to receive the same exact sort of criticism. And yes, judging the lack of diversity at MSNBC by the images of talent on the company web page is a shallow approach – but so too is judging the Tea Party organizations without first-hand experience.

As for the alleged axe-to-grind mission of the “fired MSNBC employee” I plead guilty to being ignorant of the history between MSNBC and Mediaite founder Dan Abrams. But I’m surprised that MSNBC bookers and Today Show producers haven’t got the memo that he’s been fired. More importantly, the opinions and sentiments in all of Mediaite’s pieces have been those of the editors and writers of Mediaite.

During his “Special Comment,” Olbermann shared an extremely personal story about his ailing father’s desire for his son to simply put him out of the misery he was suffering from his terminal illness. It was a well-reasoned, intimate and extremely personal moment that had special meaning given the context of health care reform, and reminded us all of Olbermann’s significant talents. However, it also reminded at least one viewer that Olbermann’s heart and mind is likely focused on a much bigger issue, one that we sincerely hope resolves itself in the least painful way possible.