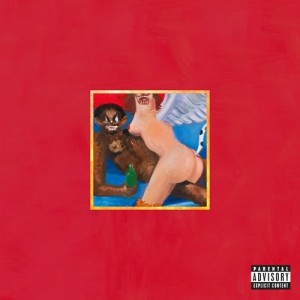 Yesterday, on his always entertaining Twitter feed, Kanye West tweeted that “they” had banned the proposed art for his upcoming album My Beautiful Dark Twisted Fantasy. Nothing new in the world of popular music but this is one of the first times a censored artist can head right over to his laptop and quickly upload the rejected art as well as a passionate defense of it. This is exactly what West did. And thus, through the magic of technology, subsequently allowed the entire world to join in the argument over whether or not children should be allowed to see a painting of Kanye banging a phoenix.

The artwork in question was done by the artist George Condo and is fairly tame, to be honest. And West, who has been known to go a little overboard in his Twitter ranting, kept his argument to a succinct eight Tweets, getting some good points in along the way.

Yoooo they banned my album cover!!!!! Ima tweet it in a few…

Banned in the USA!!! They don’t want me chilling on the couch with my phoenix! http://twitpic.com/2ykxjk

In the 70s album covers had actual nudity… It’s so funny that people forget that… Everything has been so commercialized now.

In all honesty … I really don’t be thinking about Wal-Mart when I make my music or album covers #Kanyeshrug!

I wanna sell albums but not at the expense of my true creativity.

West may be accurate that some albums in the past have had actual nudity but the censoring of his cover also isn’t without precedent. For example, the famous artwork for David Bowie’s Diamond Dogs was airbrushed to remove the genitalia from Bowie’s half dog/half man creature. God, why won’t the prudes in this country allow people to see animal/human hybrids in all of their glory?!

Still, West makes some good points. For what reason should he restrict his artistic vision just because of the censor happy folks at Walmart (besides money, obviously). And the album is about as offensive as two naked stick figures.

So, what do you all think? Is West right and this is needless censorship or are our children safer for not seeing a phoenix’s nipples?