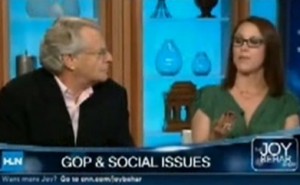 Maybe he’s trying to drum up attention for the launch of his Current TV show, but Keith Olbermann is embroiled in another nasty Twitter fight, this time with Glenn Beck protege´ SE Cupp. Responding to a tweet about Cupp’s Planned Parenthood remarks on The Joy Behar Show, Olbermann tweeted “On so many levels she’s a perfect demonstration of the necessity of the work Planned Parenthood does”

When I first saw the tweet (forwarded to me by a colleague), I was certain that Olbermann had laid a clever trap, and that when Cupp’s supporters inevitably slammed Olbermann for wishing she’d been aborted, he would point out that as a woman, SE could benefit from the other 97% of Planned Parenthood services that Sen. John Kyl didn’t seem to know about.

Close. Olbermann did deny wishing an abortion on Cupp, and did reference Kyl, but said “I never mentioned abortion. I said her parents could have used counseling by PP rather than get the results they did”

Too mean, Keith. Too mean.

It pains me to have to write this, too, because on the substance, I agree 100% with Olbermann, Planned Parenthood is money well spent, especially if you’re anti-abortion. I’m also really pissed off at SE Cupp’s stablemate, Glenn Beck, for calling women who use Planned Parenthood “hookers.” That’s a group that includes many mothers, daughters, sisters, wives, and girlfriends. If SE reads this, I hope she gives Glenn hell over that remark.

Compared to Beck, SE Cupp’s stance, agree with it or not, isn’t all that unreasonable, at least in the Behar clip Olbermann referenced. She doesn’t believe in abortion, and doesn’t want her tax dollars used for it, but concedes in the end that people sometimes have to pay for things they don’t support. There’s no law that says she has to like it: (from CNN)

In fact, I prefer her framing to what Democrats have been accepting until now. The question shouldn’t be whether federal funds are being used for abortions, but why aren’t they. This is a legal medical procedure, so what difference should it make if federal funds are used for it?

The Blaze has a thorough rundown of the back-and-forth, including a response to Olbermann from SE’s mother.

Here’s the thing we all forget sometimes: these are human beings. Beck forgot that the women who use Planned Parenthood are regular women. Olbermann obviously forgot that SE Cupp is a human being, as well.

I had the privilege of sharing drinks with SE at this year’s CPAC, and as it happens, there’s only one part of our conversation that I’m sure I’m at liberty to share. I asked her what the SE stands for, the most obvious question in the world.

The name struck me as immensely humanizing, as you can almost hear her folks calling her in for dinner in the twilight (or maybe not. Back in my day, kids went outside to play until dinnertime). SE sounds a  lot tougher, and is probably better suited to her line of work.

We have corresponded some via email, and I appeared on her show once, and I’ve never known her to be anything but kind and generous of spirit. I’m always impressed by anyone who can stand me, but especially those who disagree with everything I stand for.

For what it’s worth, then, I’m glad that Sarah Elizabeth Cupp was born.

Keith Olbermann is not likely to apologize, but he ought to recognize the degree to which he rests his appeal on his own humanity. Despite his status as a polarizing, lightning -rod of a media figure, I don’t think there was anyone on either side of the political spectrum who didn’t feel  for him during his father’s illness and eventual passing. Sharing that experience with his viewers took a lot of courage.

In a much lesser, and less serious, vein, Olbermann increasingly wore his heart on his sleeve when delivering his Special Comments, and seemed to forge strong personal relationships with fans via his Twitter account, especially since leaving MSNBC. Sure, a lot of his appeal probably also rests in his ability to be a prick to those his audience dislikes, but do they want him to be this kind of prick, to this kind of person?

I don’t watch SE every day, but I’ve never known her to be nasty, like some of her other conservative counterparts. Even if she was, wishing someone had never been born is almost comical in its hyperbole, the kind of thing you’d say about Hitler. Yeah, that just happened.

I’m not saying people shouldn’t be mean to each other. Sometimes, it’s fun, like Olbermann’s recent feud with SE Cupp’s producer, Nick Rizzuto. Hell, being called a “hatchet man” by Olbermann was a personal highlight for me, right up there with Andrew Breitbart telling me to…never mind.

What I’m saying is that we should keep it fun, and if we can’t keep it fun, then at least keep from wishing each other out of existence.