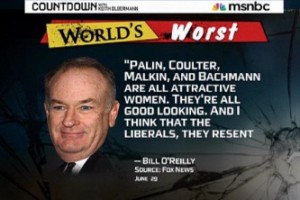 On last night’s Countdown, Keith Olbermann awarded Bill O’Reilly the bronze in Worst Persons for accusing liberals of being embittered at the hotness of their “most hated” women. I was all ready for Keith to tee off on O’Reilly for furthering some of the right’s piggish attitudes toward women, and maybe establish the premise that hotness is a prerequisite for conservative women to succeed. Yeah, not so much. His response was, essentially, “These chicks aren’t hot!”

If I take his meaning, his reply to O’Reilly is that some, or all, of these women are, in fact, not hot. Not only does this validate O’Reilly’s sexist premise, it’s also lazy. I understand that a great deal of Olbermann’s appeal is rightly derived from his no-holds-barred attitude toward conservatives, but physical appearance is one hold that is eminently barrable.

What O’Reilly did here was an affront to these conservative women. Sarah Palin, Michelle Malkin, Ann Coulter, and Michele Bachmann all work very hard to piss off the left (and in some cases, any thinking humanoid), so to suggest that the left’s ire is simply a function of their relative hotness is extremely degrading. Each brings to bear a particular skillset, and all are undeniably hard-working and tenacious.

For example, the mental gymnastics required by Palin’s attempt to back out of “Drill, baby, drill!” would crumple most mere mortals into a drooling heap. Bachmann’s continued Johnny Castle-esque campaign to keep the Obama administration from putting BP in the corner even baffled O’Reilly.

In all seriousness, though, each of these women, like them or not, possess qualities far beyond physical attractiveness that make them successful. They’re charismatic, they know their audience, and two of them (Coulter and Malkin) match their inflammatory personae with the toughness to take what’s dished out to them.

A far more substantial observation would be the fact that the conservative movement, all other qualities notwithstanding, only seems to welcome attractive women. (Please stick around at this point to see how many conservative commenters take this bait, and list their favorite right-wing uggos in the comments.) This stands in stark contrast to the men of the right, whose physical requirements are, apparently, nonexistent.

It’s true that sex appeal is a fact of life in the media, but Coulter is an author, Malkin, the founder of a blogging empire, and Palin and Bachmann are politicians.

While we’re on the subject of O’Reilly, let me also observe that if Olbermann if he truly seeks to distinguish himself from O’Reilly, should also strive to be better than him when it comes to crediting others’ work, even people you don’t like. The list O’Reilly describes is 100 Americans the Left Hates Most, compiled by Townhall.