Kellyanne Conway: I Had to ‘Think Like a Man’ and ‘Behave Like a Lady’ to Succeed in the GOP
Opinion

Kellyanne Conway: I Had to ‘Think Like a Man’ and ‘Behave Like a Lady’ to Succeed in the GOP 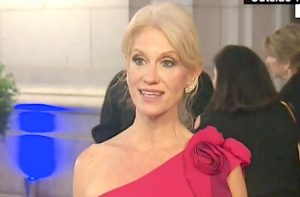 Kellyanne Conway‘s close relationship with the president has always served as a reliable shield for President Trump and his supporters to deflect on accusations of sexism. Conway’s eagerness to justify the president’s sexism and defend racist policymaking speak for themselves about why this is ridiculous. But a new interview with Conway in which she shines a light on what it was like to rise to power within a male-dominated party serves as further proof that she has little interest in being a proponent for the inclusion of women in politics.

In the interview with Time, Conway recalled “walking into the men’s locker room at the Elks Club holding a bachelor party.” It’s a familiar feeling to all women who dare to foray into a male-dominated place of work — you’d almost feel sorry for her if her motivation hadn’t been to serve a party that routinely disenfranchises other women by opposing policies for workplace equality.

Conway added that her “comfort level” in the GOP, as well as her ability to rise to “the highest ranking non-relative female in his White House” stemmed from her ability “to think like a man and to behave like a lady.”

Of course, no woman should inherently have the obligation to be a gladiator for women’s rights and representation in politics, just because she is able to find success, herself. Men certainly don’t shoulder this same expectation to get more men into politics.

But Conway, Trump, and their supporters have no right to market her success as a feminist victory if they have no interest in changing the rules of the game, and reforming a political order meant from its inception to exclude women. Even today, Congress is 80 percent male, despite women forming roughly half the population.

If Conway is insisting that women who want to find success in politics should just conform themselves to male expectations and adjust their brains to function in a patriarchal society, she clearly has no interest in changing the society around her to be more inclusive and less catered to men’s wills. Her words suggest that anyone can find success if they just tweak their brains to think like men and to fit in at men’s clubs, rather than that these men’s clubs, which continually discourage and exclude women, should be dismantled.

She also seems to think any woman who thinks like a man and then “behaves” according to patriarchal demands for “lady-like” behavior, there’s no excuse for them to not be successful. Intimidation, sexual harassment, and the abuse of gendered power dynamics that many women face — and that the president himself perpetuates and condones — are not excuses in Conway’s eyes. If anything, her success seems to have given her the mindset that women do not deserve reforms to help them achieve parity in workplaces that overlook women’s qualifications and competence to favor men.

Conway did have this to say about how she had explained Hillary Clinton to her children:

“I would tell them that I respect very much that Secretary Clinton was running for president, and it showed that in this country, anybody can do anything if they set their mind to it. At the same time, I tried to explain to them that you could be excited for someone with whom you disagree, and share in that moment in history as a proud American.”

However, she ignores how it’s hard to be excited for someone with whom you disagree on fundamentals like whether or not the government should be able to force women to give birth, or whether or not a man who equates white supremacists to protesters of racism deserves to be the president.

Time has completed a series of interviews with women who were the first to achieve certain landmark victories in their field. Conway was the first woman to manage a successful presidential campaign. As Jezebel put it, “Time is shouting out ‘women who are changing the world,’ but have not specified ‘for the better.'” According to Aimée Lutkin, this is, perhaps, “why it includes Conway.”