Kimmel Roasts ABC Upfronts: ‘All of Our New Shows Will Be Canceled’

Kimmel Roasts ABC Upfronts: ‘All of Our New Shows Will Be Canceled’ 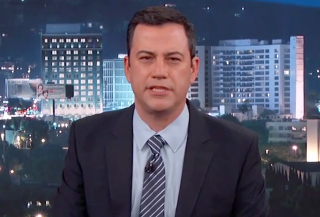 Last weekend tons of network TV shows were cancelled last weekend in what can only be described as the business equivalent of the Red Wedding, but worry not, because they’re going to replace the shows you grew to love with shows you will either learn to love or will find utterly repulsive and wonder how the hell this crap got on the air. Well, ABC got its turn to reveal its exciting fall lineup today, but after the network hyped and fluffed, in walked Jimmy Kimmel to deflate everyone’s bubbles with plenty of jokes at ABC’s expense.

And from ABC’s claim to be the number one network to the fact the network actually has a show debuting in the fall titled Selfie, Kimmel had plenty of material to work with. For one thing, he said, “I know I say this every year, but this year, I’m totally serious in saying all of our new shows will be canceled.”

Kimmel warned those in attendance not to become too attached to any of the new shows, because “most of them won’t survive; it’s like adopting a kitten with cancer. ”

But Kimmel also took some shots at ABC’s rival networks. NBC, for one, recently locked up summer and winter Olympic television rights until 2032, which means NBC just naively assumes “there’s gonna be winter by 2032.” And as for CBS: “People who watch CBS are like Sasquatch. I’ve heard reports that they exist, but I’ve never actually seen one.”