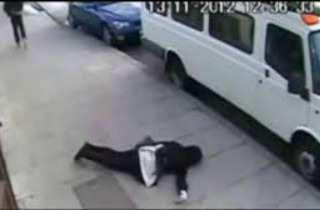 The random, violent attacks known as the “knockout game,” which have become the focus of a significant amount of media attention over the past two weeks, are either a societal scourge or isolated and inconsequential depending on the media outlet covering the phenomenon. In an op-ed published on Thursday, conservative radio host Larry Elder tore into media outlets which he said were downplaying the significance of these attacks.

“The “knockout game” — and the media underreporting of it — combines the breakdown of the family with the media’s condescending determination to serve as a public relations bureau for blacks,” Elder’s scathing editorial began. “Both National Public Radio and The New York Times say these reports of the “knockout game” being widespread are overblown and do not represent a trend. Really?”

From a distance, the media can spot some lone idiot holding up an offensive sign at a tea party rally. But when it comes to black perp/white victim crime, there is a very different attitude.

Elder cited instances of mobs of African-American teens singling out white people for attacks while shouting racially charged insults, including one such offense in Los Angeles. He insisted that overwhelming evidence suggests that these attacks were racially motivated, but groups like a local NAACP branch insisted unconvincingly that there was not “sufficient information” available to determine the motive for the attacks.

“NPR finally got around to mentioning Long Beach — a month later,” Elder wrote. “And the NPR piece was really about whether blacks, given America’s history of racism, can even commit a ‘hate crime.’”

Elder concluded that the disintegration of the black family, a problem that even President Barack Obama acknowledged in his 2008 campaign, was part of the impetus behind these attacks. Elder asked why, if even the president acknowledged the underlying societal malady prompting these attacks, the press cannot bring itself to do the same.