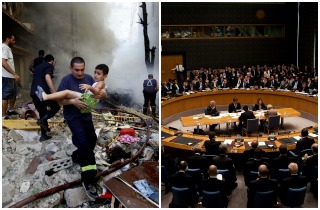 Events are developing rapidly as American officials marshal domestic and international support for a solution to the ongoing civil war in Syria, which has come to be characterized by the use of chemical weapons. On Tuesday, Syria admitted that it possesses chemical weapons for the first time and a Russian proposal to oversee the surrender of Bashar al-Assad’s chemical weapons began to collapse in the United Nations.

In a last minute move to avert an American strike on Syrian targets, Damascus announced on Tuesday for the first time that it does possess chemical weapons. The Syrian government added that it would become a signatory to treaties which forbid the use of chemical weapons.

In a related development, Russia cancelled an emergency meeting of the United Nations Security Council on Tuesday. According to a report in The Wall Street Journal, Moscow “balked” at a French plan which would have enforced an international agreement to monitor Syrian chemical weapons. The binding agreement would have allowed for military options if necessary.

American officials had announced on Monday that they were investigating the prospects of a negotiated solution to the Syrian crisis if Syria surrendered control of its chemical weapons stockpiles to international control. Though the logistics of such a proposal were complicated, many appeared to believe that it was a better alternative to military action.

The collapse of an agreement in the Security Council introduces doubt into the assumptions made by many in the media that the Russian proposal would avert conflict.