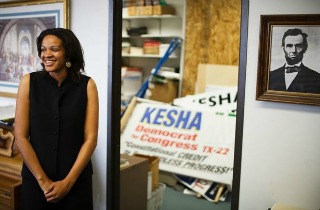 In what has to be a blow for Democratic partisans who were convinced that state Sen. Wendy Davis (D-Fort Worth) can single-handedly turn the Lone Star State blue in November, the Texas Democratic Party appears to be on the verge of tarnishing its reputation. According to a poll conducted by the University of Texas and the Texas Tribune, the frontrunner to face likely incumbent Sen. John Cornyn (R-TX) in November is Kesha Rogers. She is also somewhat… unhinged. 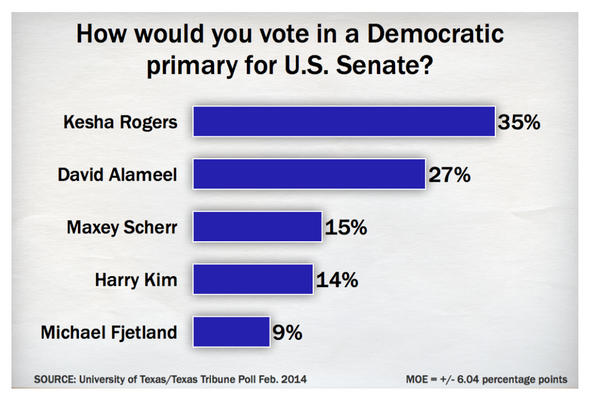 But Democrats might be careful what they wish for…

“As an acolyte of perennial presidential fringe candidate Lyndon LaRouche, she believes the U.S. economy is secretly controlled by a cabal of London financial institutions,” wrote Dallas Morning News reporter Nick Swartsell in December. “She’s paraded around Houston with a giant picture of Obama sporting a Hitler mustache and compared the Affordable Care Act to 1930s-era Nazi eugenics policies.”

That’s right. Her campaign even features a video on her website comparing President Barack Obama to Narcissus and advocating for his removal from office.

SuperEgoGenocidal-NarcissistPsychosis! from Kesha for Congress on Vimeo.

Rogers has also made a central plank of her campaign platform the colonization of Mars and the funding to prepare NASA to use nuclear missiles to intercept potential earth-impacting asteroids.

The Democratic message in 2014 might be slightly undermined by a candidate who compares the leader of her party to Hitler and suggests the ACA is the successor to the legacy of Josef Mengele.