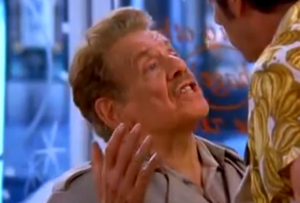 Let’s see if this counts as part of the War on Christmas™: Festivus poles are being erected in both the Wisconsin and Florida state capitals, alongside the other holiday… sorry, Christmas displays. The holiday, famously started by Seinfeld‘s Frank Costanza, has taken on a life of its own and been symbolically embraced by secular groups in the years since. And now they’re fighting for a place at the table. Sometimes it’s a giant A, sometimes it’s a giant pole.

Madison, Wisconsin boasts a giant, 30-foot Christmas tree at the capital, not to mention a secular version of the “room at the inn” including Charles Darwin, Albert Einstein, and Mark Twain, and also now happens to be home to a Festivus pole. The traditional airing of grievances will take place two days before Christmas, though sadly there will be no feats of strength.

There is also a Festivus pole at the Florida state capital, and there’s nothing about it at all that doesn’t scream “Florida!”, including the material the pole’s made out of.

“I still chuckle, I literally can’t believe there will be a pile of Pabst Blue Ribbon cans in the state rotunda,” said Chaz Stevens, a Deerfield Beach resident who applied to the state Department of Management Services to put the Festivus pole on display.

A giant tower of beer cans, on display in the Florida capital. That makes more sense than anything else I’ve ever heard.

And in case you needed a holiday primer, behold the Gospel of Costanza:

[Editor’s note: This post has been updated to reflect that the Wisconsin pole was not “giant” in size, since it was actually only 2-feet-8-inches in stature.]