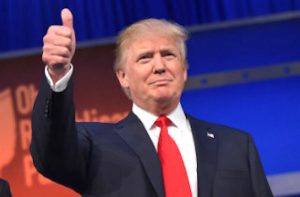 Republican president-elect Donald Trump took a major, provocative action that utterly destroyed his relationship with his press pool Tuesday: he had a steak dinner, and didn’t tell them about it.

It’s more complicated than that, of course. What happened is that Trump’s staff called a “lid,” which in press parlance means that they announced that he would he would not appear in public for the rest of the day. But not long after, Trump and his family went out for a steak dinner at a trendy Manhattan restaurant. Reporters only found out after seeing pictures of Trump at the restaurant on Twitter.

This, the public was informed, was a “terrible” thing, “unprecedented,” something that exemplied Trump’s “lack of transparency.”

The American people *depend* on accurate info re potus whereabouts. Hoping for an appreciation of this, to uphold solemn WH/press tradition.

On some level I understand where the press is coming from. During the Barack Obama administration, reporters often remarked upon how they were constantly frustrated by the small, irksome ways in which the White House made it more difficult to do their jobs (like refusing to disclose the wine list for a party). It’s the little things that are sometimes symptomatic of a greater problem with how a president or president-elect views the importance of transparency.

But there is such a thing as choosing your battles. No matter how right the press corps is on principle, to the average American, this comes across as unbelievably petty. Donald Trump and his family wanted to have a nice, fancy dinner after a long and arduous campaign where their every move was under a microscope, and they wanted to have it away from the press. I suspect most Americans would sympathize with that sentiment regardless of their feelings about Trump.

Suppose it came out that this was something Obama had done eight years ago. Would the media really be as outraged? I doubt it. If anything it’d be portrayed as a puckish move by a devoted family man.

In fact, I know that’s how they would have reported it, because that actually happened:

President-elect Barack Obama left behind the pool of reporters assigned to follow him this morning when he and his daughters Malia, 10, and Sasha, 7, headed to Sea Life Park, a marine amusement park near Waimanalo and Bellows Air Force Station.

It was the first time Obama’s motorcade has traveled without his protective press pool during his vacation and perhaps since the election. Obama has largely avoided the press during his first half of his 12-day vacation on Oahu, and has not spoken to the reporters following him daily.

Obama’s press aides sent reporters home for the day around 9:30 a.m., after the president-elect returned to his Kailua vacation home from the gym. Reporters returned to Waikiki, which is about a 30-minute drive from Kailua.

“The Obamas left the park at 1:40, after attending the interactive dolphin show,” Politico went on to report. “Based on his dry clothes, it did not appear the president-elect swam with the dolphins.” My, what an amusing anecdote that they clearly didn’t think was a harbinger of the end of freedom of the press as we know it. (The Federalist’s David Harsanyi points out Obama would later ditch the media to play golf and watch his daughter’s soccer game).

I don’t think this a liberal vs. conservative thing. The difference is that back in 2008, Obama came into the White House promising the most transparent administration ever, and the media was still buying into that narrative. Trump is open in his antipathy for the press, and so they tend to overreact when he does anything even slightly hostile.

In general, I can buy the complaint that the American people deserve constant, accurate updates of the president’s movements. But I find that hard to reconcile with the complete disinterest outside of the conservative media in accounting for President Obama’s movements on the night of the attack on the U.S. consulate in Benghazi. The White House has steadfastly refused to say where Obama even was that night, and Obama advisor Dan Pfeiffer dismissed it as an “irrelevant fact.” That was somewhat more important than steak dinners, and yet reporters who seriously look into the issue are still dismissed as cranks.

I won’t say this stories like this are “why Trump won,” because I hate the idea that Trump’s win can be easily chalked up to a handful of factors. But freak-outs like this only give Trump ammunition for dismissing and disparaging the media and plays into the perception that he is being held to an absurdly high standard. And yes, he employed that strategy to great success during the election.

So as Marie Antoinette might say: let them eat steak. Reporters, swallow your pride and save your outrage for another day. That way, if (or when) Trump takes more serious and troubling steps to clamp down on the press, the media has the credibility it needs to fight back.