‘Let These Kids Play’: Twitter Not Thrilled With Officiating in National Title Game

‘Let These Kids Play’: Twitter Not Thrilled With Officiating in National Title Game 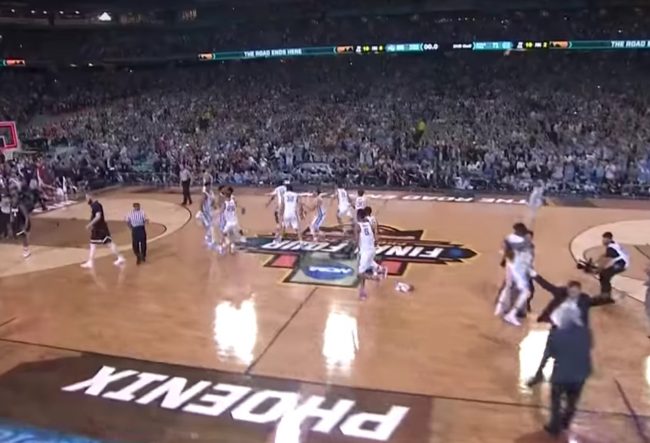 A year after losing the National Championship game on a heartbreaking buzzer beater, North Carolina defeated Gonzaga 71-65 to win the program’s sixth title.

But the game was, frankly, a mess. And that was largely due to the officiating. The refs called the contest extremely tight, putting multiple players for both teams in foul trouble and never allowing them to get into the flow of the game. They also went to the replay monitor numerous times on what should’ve been routine calls. And then, remarkably, given their prudence throughout the night, they blew a crucial call late which helped seal the deal for the Tar Heels.

Basketball players, fans, and pundits were less than thrilled. They took to Twitter with their grievances.

Let these kids play. Put the whistles away.

Rumor has it the refs are still calling fouls as they hand out the trophies. #nationalchampionship

We basically watching the refs make all the plays

Sloppy game…refs too.. One of the worst officiated games of the season. At one point more fouls than baskets… #nationalchampionship

The refs would call a foul on excessive breathing

Hopefully the person that emailed LPGA about Lexi Thompson, will email the NCAA to tell them these refs stink.#nationalchampionship

Refs please let the kids decide the game. In the bonus with more than 10 mins left in the game. Come on!!#nationalchampionship

Kind of scary that the only people on the floor getting paid are the refs.

If you waited all college basketball season to watch refs and free-throw shooting decide the NCAA Tournament, it’s your lucky day!

Once again… the refs are the stars of the game. Thanks #NCAATournament

Step 1: Drink every time the refs call a foul in the #nationalchampionship game.

With 50 seconds left to play and Gonzaga down one, a scramble for the loose ball ensued. The refs called a tie-up, and since North Carolina had the possession arrow, they kept the ball.

But as you can see in the photo below, North Carolina’s Kennedy Meeks appeared to have a hand out of bounds during the struggle for possession, which means the ball should’ve gone to the Zags.

HOW WAS THIS NOT REVIEWED https://t.co/HvKtPY3lCd

it was a lightly officiated game, refs wanted to let things play out https://t.co/ozYSF1T0ei

Can I call into the NCAA now to have them retroactively go back and give that ball to Zags? Meeks was out of bounds on previous possession.

So we’re just going to ignore Meeks being out of bounds?

Hold it….a viewer has called in with video evidence of Meeks’ hand out of bounds. The LPGA is taking away North Carolina’s trophy.