Is Levi Johnston Really Going To Pose For Playgirl?

Is Levi Johnston Really Going To Pose For Playgirl? 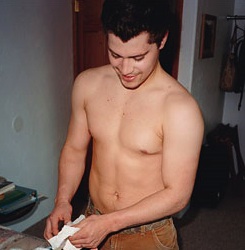 Former future Sarah Palin son-in-law Levi Johnston floated the idea of posing for Playgirl in a pricelessly awkward video for Vanity Fair last month, but now, the plan is taking shape.  I got the big news via Jake Tapper‘s Twitter feed, where he correctly observed, “I think I speak for America when i say ‘Playgirl still exists?'”

It turns out, he’s only half-right.  I checked out the AP story Jake was linking to, and buried in the story about Levi’s promised 6-day-a-week workout schedule was this tidbit:

…a formal agreement has not been reached with the online magazine but adds it’s a “foregone conclusion” it will happen.”

Oh, how the mighty have fallen.

Playgirl published its final print issue in January of 2009, which arguably puts them ahead of the curve.

Although Levi is certain that he will drop his Levis for Playgirl, he still hasn’t decided if he wants to have his Johnston photographed, which is indicative of Playgirl’s overall problem.

Playgirl always had a “me too!” quality to it that rang false.  Founded in 1973 as a response to men’s magazines like Playboy, it suffered immediately from the fact that a “playgirl” isn’t a real thing (unfortunately, the words we do have for the female equivalent of a playboy are all pretty nasty).  The real flaw, though, is the idea that being equal means being the same.  I don’t think feminism ever aspired to create a female equivalent of a playboy.

From a practical standpoint, I think the magazine also suffered from a lack of guys willing to show their stuff, certainly famous ones, and without the “full monty,” you’re basically a fitness magazine.  Playgirl never became the automatic whistlestop for sex symbols that Playboy was.

I’m sure the site’s past legal troubles didn’t help any, either, but Playgirl was always an also-ran.  Still, I don’t think it’s exactly a tragedy that women never got their version of Playboy.  They’ve already got lots of magazines to read for the articles, and you don’t see anyone rushing to publish “Dude-mopolitan,” do you?