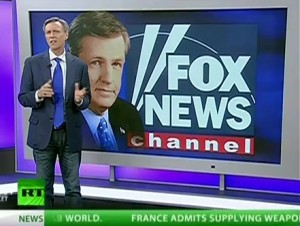 Liberal radio and TV host Thom Hartmann has been engaged in a bit of a feud with Glenn Beck’s The Blaze website over comments Hartmann made on his cable show The Big Picture. A few weeks ago, Hartmann suggested that President Obama retaliate against GOP opposition to raising the debt ceiling by having Tim Geithner cut funding to red states. The Blaze accused him of wanting to “starve people in red states.”

According to the GAO, if the debt ceiling is not raised, the Treasury Secretary has sole authority to decide which obligations get paid, and which do not. Hartmann’s idea, then is for the President, through Geithner, to pressure Republicans by cutting off funding to Republican states and districts first, and let those GOP congressmen explain to their constituents “why their food stamp cards don’t work, why their Social Security checks aren’t arriving, and the road repairs are all stopped, and half their schools are closing.”

He called it a “chainsaw” in the budgetary knife fight.

The Blaze zeroed in on the “food stamps” comment, and accused Hartmann of advocating mass starvation. On Thursday night’s The Big Picture, Hartmann took exception to The Blaze‘s accusation, doubled down with his Reagan building suggestion, and also noted that Fox News’ Brit Hume has cottoned on to the same strategic possibility:

Hartmann’s suggestion about closing all the Reagan building made me laugh out loud, imagining the collective gasp from the many members and supporters of the Society Of People Who Want To Get Stuff Named After Ronald Reagan. Food stamps are one thing, but don’t mess with Dutch!

There are two big flaws in Hartmann’s plan, the most glaring being that no Democrat would ever do it. Democrats don’t play this kind of hardball. Their game is more like bocce, where you get as close to the goal as you can, without getting knocked out.

Republicans, however, would do this in a heartbeat, and so Hartmann has just given the next Republican president (Christie ’16?) another club to beat Democrats over the head with.

Either way, it would be a radioactive precedent, one that could be turned against either party’s voters. Plus, what about the Democrats in a state like Utah? Both of them would be hurt. Hartmann’s idea does, however, drive home the adage “all politics are local,” and takes the debt ceiling out of the realm of the abstract.