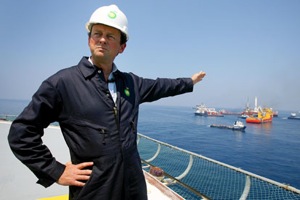 BP CEO Tony Hayward really, really wanted his life back, and now that he has it, he’s making the most of it on the Isle of Wight, where he is attending a yachting event to watch his boat “Bob” race across the delightfully clean waters of Europe. Remember when it was possible to “yacht” around the Gulf of Mexico?

What’s that saying, something about Nero and Rome burning down? Anyway, according to the AP, sounds like Hayward is having a blast today!:

“Spokeswoman Sheila Williams says Hayward took time off his duties handling the oil spill catastrophe in the Gulf of Mexico to see his boat ‘Bob’ participate in the J.P. Morgan Asset Management Round the Island Race on Saturday.”

Our best wishes to “Bob.” Meanwhile, the AP report continues, it is completely unclear who is in charge of BP:

“Who’s in charge? Depends on whom you ask. BP Chairman Carl-Henric Svanberg told Britain’s Sky News television on Friday that CEO Tony Hayward is on his way out as the company’s point man on the Gulf oil spill crisis. He said Hayward “is now handing over the operations, the daily operations to (BP Managing Director) Bob Dudley.”

Other company officials insisted, however, that Hayward was still the man and that the switch had already been announced and isn’t immediate.

London-based BP spokeswoman Sheila Williams said the chairman merely meant that Dudley was preparing to take on the role.

“When he says ‘now,’ he means that the transition starts now,” she told The Associated Press on Saturday. “Hayward is very much in charge until we’ve stopped the leak.””

This may seem like a pure news item, but it’s not: Hayward’s complete dearth of understanding of the concept of compassion is very much a media issue. BP would have been a target of the media’s ire anyway for their negligence, but between the claims that the media is being prevented from working in the Gulf by BP officials to the suspicion that they have not been transparent with their information to anything and everything related to Hayward himself, they are nothing short of pure evil at this point both to the people that report the news and the people that watch it. And how else could they come off when they have successfully fulfilled every stereotype of the malevolent, heartless multi-national corporation that has come their way?  Taking a vacation in the ocean when you’re supposed to be cleaning up someone else’s ocean that is potentially ruined for centuries is not a news item. It isn’t a PR “blunder.” This isn’t even a recurring misunderstanding between BP and us mere mortals.

This is PR nihilism at its finest, and makes one wonder if Hayward isn’t pulling some sort of Randian scheme to take down his entire corporation before the looters can get their grubby hands all over his hard-earned cash. The worst thing is that, between Carl-Henric “Small People” Svanberg and Doug “Relative Trickle” Suttles, there is no reason to believe getting rid of Hayward– who, before his company destroyed an entire ecosystem, was actually a trusted voice for safety in the oil industry– will do anything to improve the company’s disposition.

UPDATE: BP is standing by its man’s right to “well-earned private time”, Bob is in 4th place at the races.

Here is the report of Hayward’s (other) marine adventure, via MSNBC: