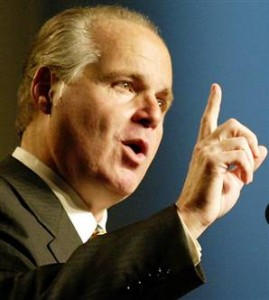 With the weekend over, we are now hearing many media figures’ reactions to this weekends’ tragedy for the first time. Rush Limbaugh spent a fair amount of time on his radio show today dealing with the issue. He railed against the media and the Left for their “predictable” attempt to blame someone (in this case, he claimed, the Tea Party or “the majority of the country”) for the act of one disturbed individual. Limbaugh is correct in saying that this was unsurprising. However, it’s unlikely that anyone would be surprised by Limbaugh’s own hyperbolic outrage.

“What an embarrassing weekend it has been for the media,” he began, calling the “state-run media” (as well as Pima County Sheriff Clarence Dupnik) “fools.”

“I find it fascinating that the media and many in the Democrat Party want to blame people that don’t know this kid, that the kid never knew, the kid never heard of, the kid was never exposed to. They want to try to blame people genuinely who are ancillary, who are irrelevant to this for what the kid did, for pure, political reasons. And there are political reasons for this. And let me do this here at the outset, folks, because this is what all of this is really all about. It is all political. I was blamed for the Oklahoma City bombing in 1995 … it’s the template, it’s the narrative.”

As is clear, it wasn’t just the media that Limbaugh was angry at (although I’m sure Limbaugh would include the media in the larger “The Left” spectrum). He guessed that there must be a piece of legislature in a “desk drawer” somewhere that The Left has waiting to employ once a killer can be more clearly linked to the Conservatives. This, he said, was Democrats “first objective.” Not mourning the death of a colleague and the possible loss another (not to mention all the complete innocents who were shot).

“You know that they were rubbing hands together. You know that they were emailing and calling each other on the phone saying, ‘Ah ha, this might be the one. This might be the one where we can officially tie it to these guys and shut them up and shut ’em down.’ They want you to believe that sadness was on the order of the day and I’m sure it was, but the opportunity and they couldn’t help themselves. They just couldn’t help themselves. Their first objective and their first priority was to try to make an association between this nut and Sarah Palin.”

While he was saying this, Limbaugh made the claim that not a single Conservative blogger blamed any Liberals for the violence. Right. Because no one linked to that Daily Kos post. And because Conservatives never rush to lay blame on “ancillary” people for violent acts. Just ask the makers of the Grand Theft Auto games or Marilyn Manson.

It’s predictable because it’s human nature. When the unspeakable happens, you find someone to blame. And when you get blamed for the unspeakable, you have to send the anger back twofold.

Listen to the clip from Limbaugh below: