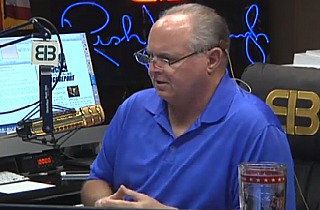 There is a new conservative argument this week that President Obama and his not-quite-love of America have an ally in none other than Jeb Bush, because apparently both believe America is “imperfect” and needs to be transformed. It started off with David Frum asking weeks ago if Bush is a “Republican Obama” and continued with National Review writer Mark Krikorian‘s piece this week about how Obama and Bush are “post-Americans.”

A “post-American” here means someone who likes their country, but doesn’t like its current state and would be happy if it was vastly improved upon.

Krikorian writes about Bush’s “dissatisfaction with America, and desire to change it to be more to his liking” in his piece, citing examples of what Bush has said on the immigration issue. He even claims that Bush has a “preference for immigrants over Americans [that] is based on emotion, not reason.”

Rush Limbaugh liked that theory and talked about it at some length on his radio show today. He played up the idea that Bush is “dissatisfied with America and wants to change it to be more to his liking, identical to what Obama wants to do.” He continued:

“Jeb thinks America is flawed, and he wants it to be something else. He wants it to be more like the place he chose to live, the Latin-American enclave in Miami. But to take that personal emotional choice and to impose it on the nation as a whole is beyond the pale. And Obama is doing the same thing. They have different reasons, but their desired results are the same.”