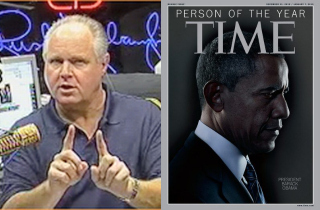 On his syndicated radio program this afternoon, Rush Limbaugh went after TIME‘s selection of President Obama, arguing that the pick was made because the re-elected president now symbolizes the “low-information voter,” or as Limbaugh bluntly called them: “stupid people.”

“Richard Stengel, who is the editor of TIME Magazine, explaining why they chose Obama. [He] essentially says that they chose Obama because he is a symbol, the champion, of the new low-information American. It’s kinda funny to listen to it,” Limbaugh began before playing Stengel’s explanation as follows:

“He won reelection despite a higher unemployment rate than anybody’s had to face in 70 years. He’s the first Democrat to actually win two consecutive terms with over 50% of the vote. That’s something we haven’t seen since Franklin Delano Roosevelt. And he’s basically the beneficiary and the author of a kind of new America, a new demographic, a new cultural America that he is now the symbol of.”

Limbaugh also noted that Stengel said: “15% of voters actually don’t care about politics. These are the people we didn’t know who are gonna show up at the polls who actually like Barack Obama, in the sense they feel like he’s outside of politics.”

In response, the conservative radio host said: “That’s the new demographic. Yeah, we’ve been making jokes here about the low-information voter, and it turns out TIME Magazine honors Obama ’cause he got ’em. He turned low-information, apathetic voters into people who vote.”

He continued to go off on the low-information voter:

We’ve never had a more radical, we’ve never had a more partisan politician in the White House than Obama. It’s only a low-information voter (we used to have call ’em “morons”) that could think he’s outside of politics, but there you have it. There you have it. TIME Magazine: We chose Obama because he’s a symbol of the new, low-information America. That’s what Stengel meant when he talked about Obama being “the beneficiary and the author of a kind of new America, a new demographic, a new cultural America that he is now the symbol of.”