Limbaugh Rips Lack Of Coverage Of Chris Dorner’s ‘Left-Wing Ties’: ‘The Fact That He’s Black Is A Factor’
audio

Limbaugh Rips Lack Of Coverage Of Chris Dorner’s ‘Left-Wing Ties’: ‘The Fact That He’s Black Is A Factor’ 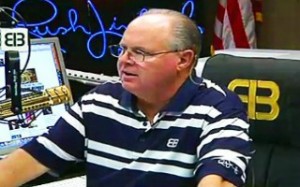 As the manhunt for murder suspect and ex-LAPD officer Chris Dorner continues, Rush Limbaugh weighed on the issue on Monday. Hitting those who have asserted that Dorner makes some valid points in his manifesto, Limbaugh noted that race is a factor.

“Despite the murders,” Limbaugh noted, some (like Steve Roberts, whom he named) have insisted there’s “intelligence…at work here, and there is racism in the LAPD…this guy’s got historical sensibility.”

“Look, the fact that he’s black is a factor here,” Limbaugh asserted bluntly. “I’m sorry, but what else would explain this? What else would excusing this — or, if not excusing it, relegating the murder aspect of what the guy’s doing to secondary status, and that the primary thing we must see is his intellect.”

He then went on to point to the New Yorker‘s Ryan Lizza noting during a TV appearance with Howard Kurtz that there’s “a kernel of truth” to the criticism. “Sometimes the media does have a hair trigger when you find out a murder suspect does have ties to, say, the Tea Party or some radical right group,” he said. “So I can understand why there’s some sensitivity on the right to this.”

“The hypocrisy is the least of it,” Limbaugh remarked. They simply don’t see that they’re ignoring Dorner’s “left-wing ties” — even though Dorner “wants the approval of liberals!” A direct tie is simply being ignored, he continued.

With that, he went on to hit Charlie Sheen for the message he sent to Dorner via TMZ (after Sheen saw that he was mentioned in Dorner’s manifesto). Going past Sheen’s publicity grab, Limbaugh added that, to some, he’s fighting a race war. That’s what makes him “an acclaimed hero to people.”