Limbaugh: ‘The Koran Gets Burned All The Time When Muslims Blow Each Other Up In Mosques’ 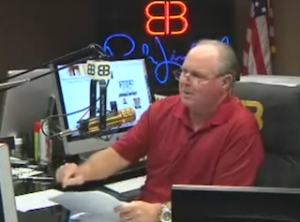 As the fall out from attention-loving, Koran-burning Pastor Someone McImnotsayinghisname continues in the Middle East, everyone is having their say on the situation. Today on his radio show, Rush Limbaugh gave his two cents, pointing out that Muslims should remember that they burn Korans just as much during their little suicide bombings. Oh, thank you, Pastor Whatever McPleasegoaway, for getting this big locomotive of cultural sensitivity started down the tracks.

Limbaugh then discussed the question of whether there’s a difference in burning a Koran and burning a Bible. He used this Mediaite post as a starting off point. The post in question discussed a Hardball segment in which guest Bobby Ghosh stated that burning a Koran is worse because it is “the word of God.” Limbaugh incorrectly attributed this theory to our writer, Tommy Christopher, when, in fact, Christopher said the exact opposite, arguing that Ghosh was displaying a “faulty understanding of Christian beliefs.”

Christopher wrote a response to Limbaugh’s comments here and even got an apology which you can listen to here.

Watch the clip from Limbaugh below: