Lindsey Graham: I Don’t Need Lectures from Trump or Clinton on Immigration

Lindsey Graham: I Don’t Need Lectures from Trump or Clinton on Immigration 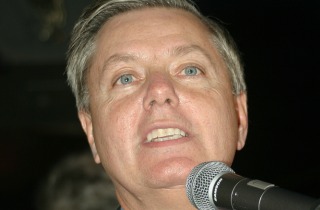 CNN’s Jake Tapper sat down with Lindsey Graham at the Atlantic Council, where he asked the 2016 hopeful about Hillary Clinton‘s criticisms of the Republican Party’s immigration stance, and Donald Trump‘s controversial remarks about Mexicans. Graham proceeded to rip both Democrats and Republicans by saying that neither side is in any position to teach him anything about the need for immigration reform.

Graham said that he was actively looking for chances to talk about immigration reform back in 2009, but even though President Obama had a house majority on his side, he didn’t see much of anything from him or Clinton.

“I want to remind anybody who cares about immigration reform, that Obamacare, Dodd-Frank and the stimulus went ahead of you,” Graham said. “[Clinton] was a public voice in 2009; I never remember her saying ‘wait a minute, President Obama — you promised to do immigration reform. Honor your promise.’ She didn’t say a word.”

Graham went on to admit that the GOP had dug itself into a hole with its relationship with Hispanic voters, and that Trump was right that the immigration system being broken. However, he said Trump was wrong to make such a damning generalization, saying “most of them are good, hard-working people”:

The first rule of politics when in a hole is stop digging, somebody needs to take the shovel out of Donald Trump’s hand…The overwhelming majority of you are here because you left a bad place to find a better place. You’ve broken our laws and you need to get that right, but I see value in you as a human being. We’ll try to find a way to fix this without destroying your family.

Graham continued to blast his competitors by saying he refused to spin the rhetoric and politics of immigrant families for his own political gain. “[Clinton] had a chance to push President Obama in 2009 and you were completely AWOL. I don’t need a lecture from you on illegal immigration. I don’t need a statement from Trump that the border’s broken, I know it.”

Graham then stated his wish that every remaining 2016 GOP candidate to join the chorus of those denouncing Trump’s approach. He said that unless Republicans embrace the message he described, the Republican Party will certainly lose in 2016. “We disagree with Donald Trump in this regard, that most of the people here illegally are good, hard-working people.”